University of Illinois at Chicago facts for kids 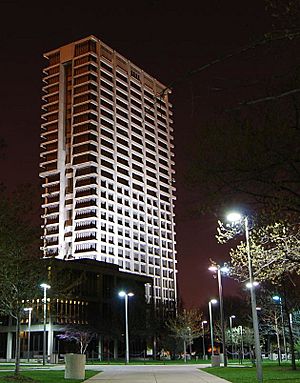 University Hall, on the east side of campus.

The current chancellor of the university is Paula Allen Mears. UIC is in the same university family as UIUC and UIS. The president of the family is Robert Easter.

The university sports teams are called the Flames. UIC has 14 varsity teams, most of which play in the Horizon League. The gymnastics team plays in Eastern Intercollegiate Gymnastics League.

All content from Kiddle encyclopedia articles (including the article images and facts) can be freely used under Attribution-ShareAlike license, unless stated otherwise. Cite this article:
University of Illinois at Chicago Facts for Kids. Kiddle Encyclopedia.