Jesús G. "Chuy" García (born April 12, 1956) is an American politician and member of the Democratic Party who serves on the Cook County Board of Commissioners.

García was born in Mexico in the state of Durango. Garcia worked at the Legal Assistance Foundation from 1977 to 1980 as he worked towards a Bachelor of Arts in Political Science at the University of Illinois at Chicago.

Garcia was elected to the Chicago City Council in 1986, and in 1992 became the first Mexican-American member of the Illinois State Senate. In 2010, Garcia won election to the 7th district Cook County Board of Commissioners, and after his election was appointed floor leader by Cook County President Toni Preckwinkle. A progressive and a reformer, García is a Preckwinkle ally and was a supporter of former Chicago Mayor Harold Washington.

A candidate for Mayor of Chicago, Garcia finished second in the February 24, 2015 mayoral election, forcing a head-to-head runoff vote between himself and the current mayor Rahm Emanuel. He lost the run-off election by carrying 44.28% of the votes. 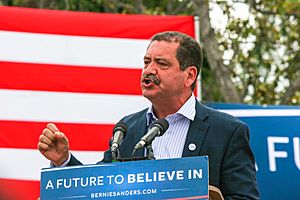 García at a Bernie Sanders rally in Los Angeles, California, May 2016

All content from Kiddle encyclopedia articles (including the article images and facts) can be freely used under Attribution-ShareAlike license, unless stated otherwise. Cite this article:
Chuy García Facts for Kids. Kiddle Encyclopedia.