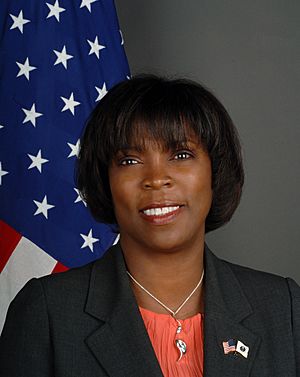 Ertharin Cousin (born 1957) is, since 2012, the twelfth Executive Director of the United Nations World Food Programme.

On June 9, 2009, Cousin was nominated by President Barack Obama to become United States Ambassador to the United Nations Agencies for Food and Agriculture.

She was born in Chicago.

All content from Kiddle encyclopedia articles (including the article images and facts) can be freely used under Attribution-ShareAlike license, unless stated otherwise. Cite this article:
Ertharin Cousin Facts for Kids. Kiddle Encyclopedia.