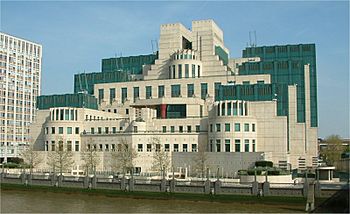 The service was formed in 1909 as the Secret Service Bureau, but its existence was not officially acknowledged until 1994.

The headquarters are at Vauxhall Cross in London in a purpose-built building. In John le Carré novels it is called The River House.

The National Audit Office (NAO) put the final cost at £135.05 million for site purchase and the basic building, or £152.6 million including the service's special requirements.

All content from Kiddle encyclopedia articles (including the article images and facts) can be freely used under Attribution-ShareAlike license, unless stated otherwise. Cite this article:
Secret Intelligence Service Facts for Kids. Kiddle Encyclopedia.