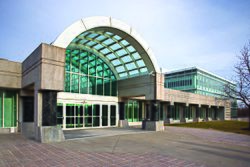 An intelligence agency is a government agency responsible for the collection, analysis, and exploitation of information in support of law enforcement, national security, military, and foreign policy objectives.

Means of information gathering are both overt and covert and may include espionage, communication interception, cryptanalysis, cooperation with other institutions, and evaluation of public sources. The assembly and propagation of this information is known as intelligence analysis or intelligence assessment.

Intelligence agencies can provide the following services for their national governments. 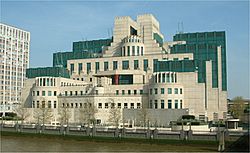 The methods of information gathering are sometimes covert (hidden) and sometimes quite open. A covert method might be to steal and copy secret documents. An open method would be to read all published work on some important matter, and analyse it. Much important material is published openly in democratic countries.

To get hold of secret information, these organisations use espionage, intercept signals (tap phones, hack computers), cryptanalysis (break codes), and think about what the information means. Putting together and communicating information is known as intelligence analysis and assessment.

Some agencies have been involved in assassination, arms trafficking, coups d'état, and the placement of misinformation (propaganda) as well as other covert operations, in order to support their own or their governments' interests.

The United States has about 17 major intelligence groups, and many other smaller groups. These are the most important:

All content from Kiddle encyclopedia articles (including the article images and facts) can be freely used under Attribution-ShareAlike license, unless stated otherwise. Cite this article:
Intelligence agency Facts for Kids. Kiddle Encyclopedia.