Finneas Baird O'Connell (born July 30, 1997), known mononymously as Finneas (stylized as FINNEAS), is an American singer-songwriter, record producer, and actor. He has written and produced music for various artists, including his sister, Billie Eilish. He has won eight Grammy Awards, including Album of the Year, Producer of the Year, Non-Classical and the Best Engineered Album, Non-Classical for his work on Eilish's debut album When We All Fall Asleep, Where Do We Go? (2019).

Finneas has released several singles as a solo artist, and his debut EP, Blood Harmony, was released in October 2019. The EP includes "Let's Fall in Love for the Night", his most successful song to date, peaking at number 17 on the US Billboard Alternative Songs chart. His debut studio album Optimist was released through Interscope Records on October 15, 2021.

Finneas starred in the 2013 independent film Life Inside Out. He is also known for his role as Alistair in the Fox musical comedy-drama series Glee. He has also made an appearance on the American sitcom Modern Family. 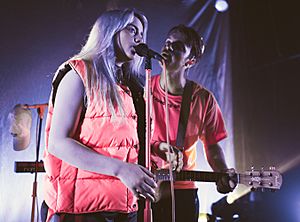 Finneas performing with his sister Billie Eilish in 2017

Finneas was born in Los Angeles to actress and screenwriter Maggie Baird and actor Patrick O'Connell, both of whom are also musicians. Finneas is of Irish and Scottish descent. In 2010, at age 12, he took a songwriting class with his mother, and began writing and producing songs.

Finneas has said his experience playing characters helped with writing music for his sister Billie Eilish, as he writes from her perspective and for her vocal range. He stated: "Being able to hear an artist and emulate them has been a huge part of being successful as a producer and co-writer". When he writes for his sister, he wants to "write a song that I think she'll relate to and enjoy singing and empathise with the lyrics and make her own", and when he writes with her he tries to "help her tell whatever story she's trying to tell, bounce ideas off of her, listen to her ideas."

Similarly to other artists, if you're writing and you know that someone else's voice is going to be the voice telling the story, it should be a language that fits them. ... Everybody has a different vocabulary, a different way of putting sentences together, and the easiest way to tell if a song wasn't written by someone is if it doesn't fit their vernacular, so I try to match whatever I'm helping them make to whoever they seem to be. A lot of that also ... is asking an artist how they feel about it. If you come up with a line, even if an artist really likes it and is like 'That's a really cool line,' it's like 'Yeah, but can you wear it? Is it a thing you’d feel comfortable with singing every time?'

Finneas had written and produced his song "Ocean Eyes" originally for his band, and gave it to Eilish when her dance teacher asked them to write a song for a choreography. They posted the song on SoundCloud, garnering praise from various websites. Finneas's manager reached out to him in November 2015 to talk about Eilish's potential. Finneas then helped Eilish sign to the A&R company Platoon. He co-wrote and produced Eilish's debut EP Don't Smile at Me (2017), which peaked at number 14 on the US Billboard 200. Finneas also co-wrote and produced Eilish's debut studio album, When We All Fall Asleep, Where Do We Go? (2019), which debuted atop the US and UK charts. He won the 2020 Grammy Awards for Producer of the Year, Non-Classical; Record of the Year and Song of the Year for Eilish's "Bad Guy"; and Album of the Year and Best Engineered Album, Non-Classical for When We All Fall Asleep, Where Do We Go?

He has also been known to work with Grammy winners the Coutinho twins. He produced the 2019 single "Lose You to Love Me" by Selena Gomez, which peaked at number one on the Billboard Hot 100, and two tracks on the 2019 album Romance by Camila Cabello. He also produced "Moral of the Story" by Ashe, and collaborated with John Legend on an unreleased song. O'Connell composed the score for the 2021 teen drama film The Fallout.

He is the lead singer and songwriter of the band The Slightlys, which played the Warped Tour in 2015. His first solo single, "New Girl", was released in 2016, with the music video released in 2019. In 2017, he released the single "I'm in Love Without You", and eight singles in 2018: "Break My Heart Again", "Heaven", "Life Moves On", "Landmine", "Hollywood Forever", "College", "Luck Pusher", and "Let's Fall in Love for the Night". In early 2019, Finneas played his first sold-out headline shows in New York and Los Angeles.

On August 7, 2020, he released a surprise deluxe version of his debut EP, Blood Harmony, featuring two new tracks, "Break My Heart Again" and "Let's Fall in Love for the Night (1964)", the latter being an alternate version of the sixth track, "Let's Fall in Love for the Night". About two weeks later, O'Connell released a single titled "What They'll Say About Us". It peaked at number 17 on the US Billboard Alternative Songs chart. On October 21, Finneas released his single "Can't Wait to Be Dead" about his love-hate relationship with the Internet, along with a visual directed by Constellation Jones the following day.

Finneas is one of 12 artists featured on Ringo Starr's 2021 EP Zoom In, contributing backing vocals to the song "Here's to the Nights". On March 2, 2021, Finneas and Ashe released a collaboration titled "Till Forever Falls Apart", which he co-wrote and produced.

On August 5, 2021 Finneas announced that his debut studio album Optimist would be released on October 15, 2021 through Interscope Records and shared its lead single "A Concert Six Months From Now".

In 2011, Finneas played a student in the comedy film Bad Teacher. In 2013, he co-starred in Life Inside Out, written by and starring his mother Maggie Baird. He had recurring guest roles on Modern Family and Aquarius, and played Alistair in the final season of the musical comedy-drama television series Glee in 2015.

Finneas is based in Los Angeles. He has been in a relationship with YouTuber Claudia Sulewski since September 2018. His single "Claudia" was written after the night they met.

He was raised vegetarian, before then becoming vegan. He has synesthesia. 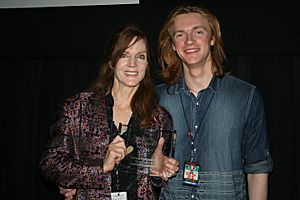 All content from Kiddle encyclopedia articles (including the article images and facts) can be freely used under Attribution-ShareAlike license, unless stated otherwise. Cite this article:
Finneas O'Connell Facts for Kids. Kiddle Encyclopedia.