Euharlee is a bedroom community of Cartersville, the Bartow County seat which is located 9 miles (14 km) to the east. They are connected through Euharlee Road, and by a chain of subdivisions and homes. Euharlee is located next to Plant Bowen, which has the second-largest generating capacity of any coal-fired power plant in the United States.

Euharlee was originally called Burge's Mill by settlers as early as the 1840s. The town was incorporated as Euharlee by the General Assembly of Georgia on September 16, 1870. "Euharlee" is a name derived from the Cherokee language, meaning "she laughs as she runs". 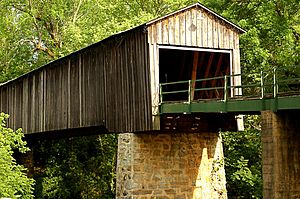 The current population, exceeding 4,100 residents, represents a substantial increase from the 1,600 residents estimated in 1995. Population growth in Euharlee is, to a great degree, attributable to the growth of the neighboring community of Cartersville.

There were 1,003 households, out of which 55.9% had children under the age of 18 living with them, 71.8% were married couples living together, 8.6% had a female householder with no husband present, and 14.0% were non-families. 10.7% of all households were made up of individuals, and 1.4% had someone living alone who was 65 years of age or older. The average household size was 3.20 and the average family size was 3.43.

There is an annual Fall Festival held with the Covered Bridge as the focal point. It is held in October. Local schools are invited to showcase choral and band ensembles throughout the weekend. Crafts and foods are sold by local vendors. There are rides for the children as well.

The festival was increased and relocated from Osborne Park with the completion of Frankie Harris Park behind Emmie Nelson Library at Euharlee in 2005.

All content from Kiddle encyclopedia articles (including the article images and facts) can be freely used under Attribution-ShareAlike license, unless stated otherwise. Cite this article:
Euharlee, Georgia Facts for Kids. Kiddle Encyclopedia.