Kennesaw State University (KSU) is a public university in the U.S. state of Georgia with two primary campuses, one in Kennesaw and the other in Marietta.

KSU also holds classes at the Cobb Galleria Centre, Dalton State College, and in Paulding County (Dallas). Present enrollment is over 35,000 students, making it the third-largest university within Georgia and one of the top 50 largest universities in the United States.

KSU is part of the University System of Georgia. The university has a multitude of academic programs in business, education, engineering, nursing, physical sciences, information technology, criminal justice, and sports management. Both the Kennesaw and Marietta campuses are located in suburban areas on a combined 581 acres (235 ha) of land.

The A. L. Burruss Building which is on the campus

Since 2005, Kennesaw State's athletic teams (except football) have been a NCAA Division I member of the Atlantic Sun Conference. The football team is a FCS member of the Big South Conference.

Kennesaw State is home to the state's largest Educational Technology Training Center (ETTC). The ETTC is one of 13 such centers around the state. Teachers and other school personnel from around the state come to the KSU ETTC for professional development. 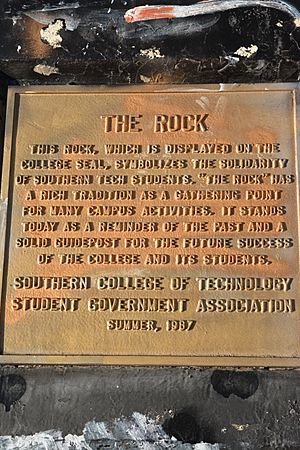 All content from Kiddle encyclopedia articles (including the article images and facts) can be freely used under Attribution-ShareAlike license, unless stated otherwise. Cite this article:
Kennesaw State University Facts for Kids. Kiddle Encyclopedia.