The Big Chicken is a KFC restaurant in Marietta, Georgia, which features a 56-foot-tall (17 m) steel-sided structure designed in the appearance of a chicken rising up from the top of the building. It is located at the city's biggest intersection of Cobb Parkway (U.S. 41/Georgia 3) and Roswell Road (Georgia 120) and is a well-known landmark in the area. Constructed in 1956, it was rebuilt following storm damage in 1993 and underwent a $2 million renovation project in 2017. 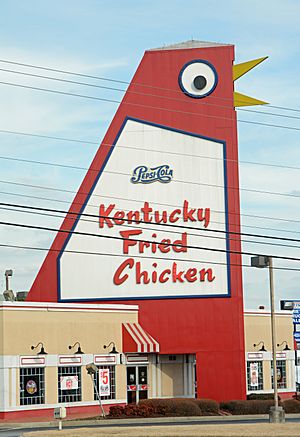 The restaurant was built in 1956 at 12 Cobb Parkway, on the newly constructed stretch of Highway 41, the first divided highway in Cobb County. Taking advantage of the prime location on the new and quicker route for travelers on U.S. 41, Johnny Reb's Chick, Chuck and Shake owner S. R. "Tubby" Davis erected the 56-foot (17-meter) tall structure over his restaurant in 1963 as a method of advertising. The novelty architecture was designed by Hubert Puckett, a Georgia Tech student of architecture, and fabricated by Atlantic Steel in nearby Atlanta (of which Marietta is a suburb). Davis later sold it to his brother, and it became a franchise of KFC.

In January 1993, storm winds damaged the structure, and rather than tear it down KFC was forced by public outcry to re-erect the building. Among those who complained about the Big Chicken being torn down were pilots, who used the building as a reference point when approaching Hartsfield–Jackson Atlanta International Airport and Dobbins Air Reserve Base. The new Big Chicken includes the original design of beak and eyes which move, although this time the vibrations which plagued the first structure (even to the point of breaking windows) have been eliminated. Pieces of the original structure were sold to collectors as souvenirs. In early April 2006, the structure narrowly escaped a small eastward-moving nighttime tornado, which overturned a tractor-trailer at a Kmart across the street, and damaged another building nearby.

The Big Chicken is commonly used as a landmark for driving directions. Locals will often include "make a [turn] at the Big Chicken", or "it's about x miles past the Big Chicken". This is referenced in music video game Rock Band 3's "Road Challenge Mode", when the player is told "Don't be alarmed if you're asking for directions in the bus and the locals tell you to 'turn left at the Big Chicken'".

It has also led to a small cottage industry of sorts, selling souvenirs emblazoned with the monument, including one sweatshirt showing Big Ben in London, the Eiffel Tower in Paris, the Colosseum in Rome, and of course, the Big Chicken in Marietta. A board game featuring the Big Chicken and other local landmarks was also produced. There is a barbershop-style singing group called the Big Chicken Chorus, formed in 1986, which gives concerts throughout the year. The Big Chicken was also featured on a promotional card in Sim City: The Card Game. The Big Chicken has also appeared in the comic strip Zippy the Pinhead as a part of artist Bill Griffith's fascination with roadside icons.

In early 2017 it was announced that The Big Chicken would undergo a twelve-week, $2 million renovation, incorporating the chain's newest design and a gift shop. The renovations began January 23, 2017. The restaurant reopened with a ribbon-cutting ceremony on May 11, 2017.

All content from Kiddle encyclopedia articles (including the article images and facts) can be freely used under Attribution-ShareAlike license, unless stated otherwise. Cite this article:
Big Chicken Facts for Kids. Kiddle Encyclopedia.