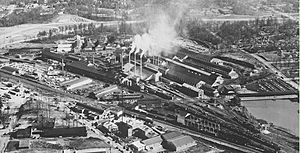 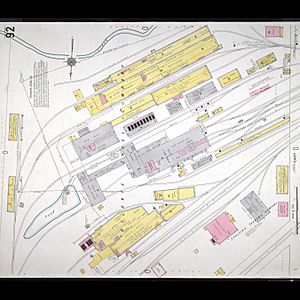 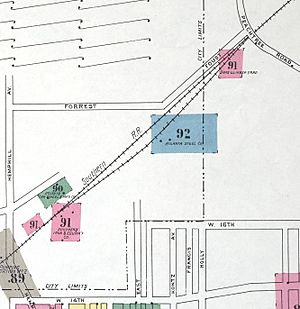 The Atlantic Steel Company was a steel company in Atlanta, Georgia with a large steel mill on the site of today's Atlantic Station multi-use complex.

From 1908-1922 Thomas K. Glenn was the company's president. A replica of his office exists at the Millennium Gate museum in Atlantic Station.

By 1952, the plant had 2,100 employees and was producing not only hoops and ties, but also "poultry and field fence, barbed wire, angles, round bars, channels, tees, handrail, reinforcing bars, nails, rivets, welding rods, shackles, [forgings] and fence posts".

The plant's "deep-throated" steam whistle was named "Mr. Tom", after Tom Glenn, an early president of the company.

In 1979, the Ivaco company of Montreal, Quebec, Canada acquired Atlantic Steel. Operations were partially shut down in the 1980s as competition from home and abroad intensified.

In 1998, Jacoby Development purchased the complex for about 76 million USD, tore down the complex, cleaned up the site and built Atlantic Station in its place.

All content from Kiddle encyclopedia articles (including the article images and facts) can be freely used under Attribution-ShareAlike license, unless stated otherwise. Cite this article:
Atlantic Steel Facts for Kids. Kiddle Encyclopedia.