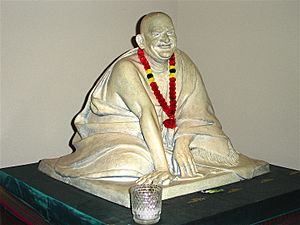 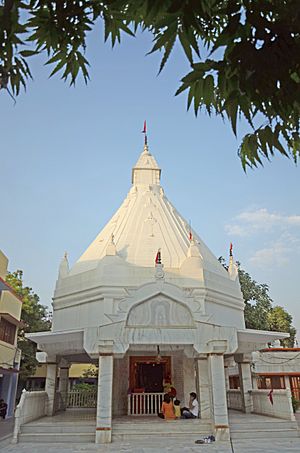 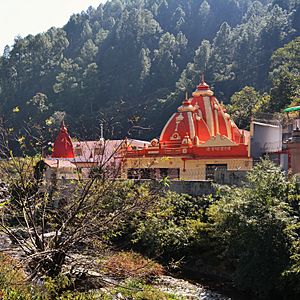 Shri Neem Karoli Baba or Shri Neeb Karori Baba (नीब करोरी बाबा) (? - September 11, 1973, in Vrindavan, India), also known to followers as Maharaj-ji, was a Hindu guru and who loved the Hindu deity Hanuman. He is known in the West for having been the guru of a number of Americans who traveled to India in the 1960s and 1970s. These students were returned to the West and told other people about Neem Karoli Baba. The most well known of these students are the spiritual teachers Ram Dass and Bhagavan Das, and the musicians Krishna Das and Jai Uttal.

Not much is known about Neem Karoli Baba's birth and early years. According to one story, he was born Lakshmi Narayan Sharma (in Akbarpur, Firozabad district in the Indian state of Uttar Pradesh. After an arranged marriage at the age of 11, he left his home and traveled a lot in northern India as a holy man (sadhu). During this time he was known by many names including Lakshman Das, Handi Wallah Baba, and Tikonia Walla Baba. When he did spiritual practice at Bavania in Gujarat, he was known as Tallaiya Baba. In Vrindavan, the local people called him Chamatkari Baba which means "Miracle Baba". Many people thought him to be a saint.

Neem Karoli was a master of bhakti yoga, and said that service to others (seva) is the best way to show love for God. In a book of stories put together by Ram Dass called Miracle of Love, a student named Anjani shares the following story:

Among the most well known of Maharaj-ji's disciples were Ram Dass, the author of Be Here Now, teacher and performer Bhagavan Das, and the musicians Jai Uttal and Krishna Das. Other notable devotees include humanitarian Larry Brilliant and his wife Girija, as well as Dada Mukerjee (former professor at Allahabad University, Uttar Pradesh, India).

After returning to the United States, Ram Dass and Larry Brilliant founded the Seva Foundation, a worldwide development organization which tries to end world poverty by following the teachings of Neem Karoli Baba. Seva is based in Berkeley, California, and Ram Dass still serves on the Board of Directors to this day.

All content from Kiddle encyclopedia articles (including the article images and facts) can be freely used under Attribution-ShareAlike license, unless stated otherwise. Cite this article:
Neem Karoli Baba Facts for Kids. Kiddle Encyclopedia.