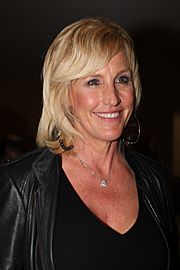 Erin Brockovich (born 22 June 1960 in Lawrence, Kansas) is a legal clerk and an environmental activist. Brockovich was important in making cases against the Pacific Gas and Electric Company in California. It was the largest direct-action lawsuit in history at $333 million. Since the 2000 movie Erin Brockovich, she has hosted Challenge America on ABC. She presented the documentary series Final Justice with Erin Brockovich in 2003.

All content from Kiddle encyclopedia articles (including the article images and facts) can be freely used under Attribution-ShareAlike license, unless stated otherwise. Cite this article:
Erin Brockovich Facts for Kids. Kiddle Encyclopedia.