Lepanto is a city in Poinsett County, Arkansas, United States. The population was 1,893 at the 2010 census. It is included in the Jonesboro, Arkansas Metropolitan Statistical Area. Lepanto was named for the Greek seaport of Lepanto, site of a great crusade sea battle in 1571. Lepanto was a site for the filming of the TV movie version of John Grisham's book A Painted House.

According to the United States Census Bureau, the city has a total area of 1.5 square miles (3.9 km2), all land.

The Lepanto School District consolidated into the East Poinsett district on July 1, 1986. 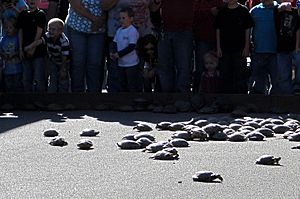 All content from Kiddle encyclopedia articles (including the article images and facts) can be freely used under Attribution-ShareAlike license, unless stated otherwise. Cite this article:
Lepanto, Arkansas Facts for Kids. Kiddle Encyclopedia.