Julia Ward Howe (May 27, 1819 – October 17, 1910) was an American poet and author, best known for writing "The Battle Hymn of the Republic." She was also an advocate for abolitionism and was a social activist, particularly for women's suffrage.

Born Julia Ward in New York City, she was the fourth of seven children born to Samuel Ward, her father was a well-to-do banker. Her mother was the poet Julia Rush Cutler, related to Francis Marion, the "Swamp Fox" of the American Revolution. Her mother died when she was five and when she was young she learned many languages such as Italian. Howe was educated by private tutors and schools for young ladies until she was sixteen. 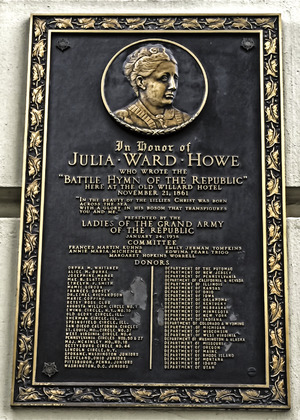 In 1843 she married a hero of the Greek revolution, physician Dr. Samuel Gridley Howe nicknamed Chev, who founded the Perkins Institute for the Blind. The couple made their home in South Boston, had six children, and were active in the Free Soil Party. She was a member of the Unitarian church.

In 1852, the Howes bought a "country home" with 4.7 acres of land in Portsmouth, Rhode Island which they called "Oak Glen." They continued to maintain homes in Boston and Newport, but spent several months each year at Oak Glen.

Howe's "Battle Hymn of the Republic", set to William Steffe's already-existing music, was first published in the Atlantic Monthly in 1862 and quickly became one of the most popular songs of the Union during the American Civil War.

After the war Howe focused her activities on the causes of pacifism and women's suffrage. From 1872 to 1879, she assisted Lucy Stone and Henry Brown Blackwell in editing Woman's Journal. 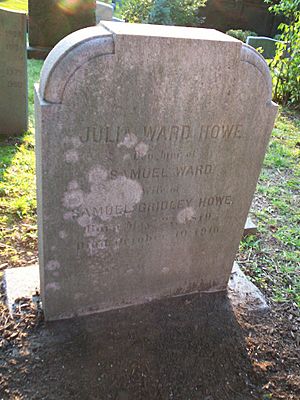 Howe died of pneumonia October 17, 1910, at her Portsmouth home, Oak Glen at the age of 91. She is buried in the Mount Auburn Cemetery in Cambridge, Massachusetts. At her memorial service approximately 4,000 individuals sang "Battle Hymn of the Republic" as a sign of respect as it was the custom to sing that song at each of Julia's speaking engagements.

After her death, her children collaborated on a biography, published in 1916. It won the Pulitzer Prize for Biography.

All content from Kiddle encyclopedia articles (including the article images and facts) can be freely used under Attribution-ShareAlike license, unless stated otherwise. Cite this article:
Julia Ward Howe Facts for Kids. Kiddle Encyclopedia.