Gardiner is a city in Kennebec County, Maine, United States. The population was 5,800 at the 2010 census. Popular with tourists, Gardiner is noted for its culture and old architecture. Gardiner is included in the Augusta, Maine micropolitan New England City and Town Area.

Located at the head of navigation on the Kennebec River, Gardiner was founded as Gardinerstown Plantation in 1754 by Dr. Silvester Gardiner, a prominent Boston physician. Dr. Gardiner had made a fortune as a drug merchant, with one apothecary shop in Massachusetts and two in Connecticut, and became a principal proprietor of the Kennebec Purchase within the old Plymouth Patent. He proved a tireless promoter for his development, which once comprised over 100,000 acres (400 km2).

Dr. Gardiner induced a gristmill builder, saw millwright, house carpenter and wheelwright to settle here. Houses, mills, a church and a blockhouse were built. Situated at the confluence of the Kennebec River and Cobbesseecontee Stream, which has falls that drop 130 feet over a mile, the location was recognized by him as ideal for water-powered mills. Gardinerstown, set off from Pittston in 1760, became center of the regional economy.

The wilderness toils of Dr. Gardiner would end, however, with the Revolution. Loyal to the Crown, he fled Boston in 1776 when the British army evacuated. But his settlement lived on without him, and in 1803 was incorporated as the town of Gardiner. From the early 19th century until the Civil War, shipbuilding and trade were primary industries. It would become a city in 1849, at which time ten large riverfront wharves served shipping. Lumber, in vast quantities, passed through Gardiner. Tanneries and shoe factories prospered.

The city became known worldwide for exporting ice. Each winter men cut large blocks from the Kennebec River, then covered the ice with sawdust in warehouses to keep it frozen well into summer. It was loaded year-round on large vessels for shipment throughout the United States and world. Gardiner was noted for its pristine Kennebec ice, harvested at the furthest point upriver that deep-draft vessels could reach.

In 1851, the city was connected by railroad. One of the first workable steam automobiles in America was built in Gardiner in 1858. Beginning in the 1860s, paper mills flourished, as did the commercial ice industry between the 1880s and 1920s. By the 1960s, however, many mills suffered decline and closure. The former mill town is now largely a bedroom community for people who work in Augusta, the state's capital, as well as Bath Iron Works in Bath. Some residents commute as far as the Portland area. The city is endowed with a great deal of antique architecture, much of it beautifully restored. In 1980, the entire downtown historic district became one of the National Register of Historic Places listings in Kennebec County, Maine.

This climatic region is typified by large seasonal temperature differences, with warm to hot (and often humid) summers and cold (sometimes severely cold) winters. According to the Köppen Climate Classification system, Gardiner has a humid continental climate, abbreviated "Dfb" on climate maps.

There were 2,487 households of which 28.9% had children under the age of 18 living with them, 44.8% were married couples living together, 11.8% had a female householder with no husband present, 5.7% had a male householder with no wife present, and 37.7% were non-families. 29.6% of all households were made up of individuals and 9.7% had someone living alone who was 65 years of age or older. The average household size was 2.30 and the average family size was 2.82.

There were 2,510 households out of which 32.5% had children under the age of 18 living with them, 49.1% were married couples living together, 10.6% had a female householder with no husband present, and 36.1% were non-families. 29.4% of all households were made up of individuals and 10.9% had someone living alone who was 65 years of age or older. The average household size was 2.41 and the average family size was 2.97. 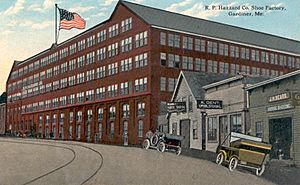 All content from Kiddle encyclopedia articles (including the article images and facts) can be freely used under Attribution-ShareAlike license, unless stated otherwise. Cite this article:
Gardiner, Maine Facts for Kids. Kiddle Encyclopedia.