Christ Episcopal Church is a historic church located at 1 Dresden Avenue in Gardiner, Maine. Built in 1820 for the oldest congregation in the Episcopal Diocese of Maine. It is the oldest known example of ecclesiastical Gothic Revival architecture in New England, and was listed on the National Register of Historic Places in 1973.

Christ Episcopal Church is located in central Gardiner, on the east side the town common and the junction of Church and Dresden Streets. It is a rectangular stone structure with a square tower projecting from the center of the front (west-facing) facade. The main roof has flat wings and a gabled center, and is surrounded by low battlement-style crenellations. The square portion of the tower is topped by similar crenellations, with an octagonal spire above. The front facade has entrances in the tower and the flanking sections, set in lancet-arched openings. Above each is a Gothic window with tracery, that in the tower considerably larger. The side elevations each have three tall Gothic windows. 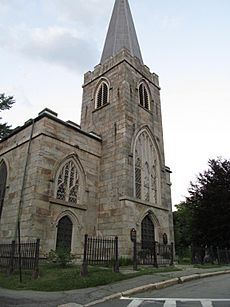 The Episcopal Church in Gardiner was organized in 1772 by Sylvester Gardiner, a major landowner for whom the city is named. This building, constructed in 1820, is its third sanctuary, the first having succumbed to fire in 1792, and the congregation having outgrown the second. It was designed by the Rev. Samuel Farmer Jarvis in what was then termed the "Gothick" style, which was then without precedent in New England.

All content from Kiddle encyclopedia articles (including the article images and facts) can be freely used under Attribution-ShareAlike license, unless stated otherwise. Cite this article:
Christ Episcopal Church (Gardiner, Maine) Facts for Kids. Kiddle Encyclopedia.