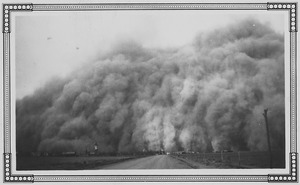 Baca County is the southeasternmost of the 64 counties in the U.S. state of Colorado. As of the 2010 census, the population was 3,788. The county seat is Springfield.

Baca County was created by the Colorado legislature on April 16, 1889, out of eastern portions of Las Animas County. Baca County was named in honor of pioneer and Colorado territorial legislator Felipe Baca.

Prior to the 1880s there was little activity in the county, other than along the Cutoff Branch of the Santa Fe Trail that crosses its extreme southeastern corner. The 1910s saw wet years and expansion due to the increase in acreage that could be homesteaded. World War I also brought increased demand for agricultural products. The arrival of the Santa Fe Railroad in 1926 created new towns and a population increase.

The Dust Bowl arrived in the 1930s, with Baca County being one of the hardest hit areas. This prompted soil conservation efforts by the federal government. Part of this effort was the purchase of cultivated land by the government in order to return it to grassland. Today the U.S. Forest Service supervises 220,000 acres of Comanche National Grassland which was purchased in the 1930s. These areas include Carizzo Creek and Picture Canyon. The Colorado Division of Wildlife maintains the recreational areas at Two Buttes Lake and Turk's Pond.

On May 18, 1977, an F4 tornado struck the southeastern portion of Baca County, causing an estimated 2.5 million dollars in damage. It tracked from Oklahoma, where damage was estimated between 25,000 dollars. It was the first F4 tornado in Colorado since at least 1950.

All content from Kiddle encyclopedia articles (including the article images and facts) can be freely used under Attribution-ShareAlike license, unless stated otherwise. Cite this article:
Baca County, Colorado Facts for Kids. Kiddle Encyclopedia.