Kids Encyclopedia Facts
Not to be confused with Norton, Kansas.

Norton County (standard abbreviation: NT) is a county located in the U.S. state of Kansas. As of the 2020 census, the county population was 5,459. The largest city and county seat is Norton. The county was established in 1867 and named for Orloff Norton, captain of Company L, 15th Kansas Militia Infantry Regiment.

In 1854, the Kansas Territory was organized, then in 1861 Kansas became the 34th U.S. state. Norton County was founded by Noah H. Billings, Thomas Beaumont, Henry Gordon, P. Hansen, and George Cole on August 22, 1872. In 1878 Norton became the county seat. The county gets its name for Civil War soldier Orloff Norton, who was killed at Cane Hill, Arkansas in 1864.

The first county fair, although not official, was held in Leota in October, 1878. After 1900 the fair was held yearly in Elmwood Park in Norton. The first school district was formed in Norton in 1872. School was held in a dugout beginning December 1, 1873. 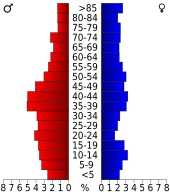 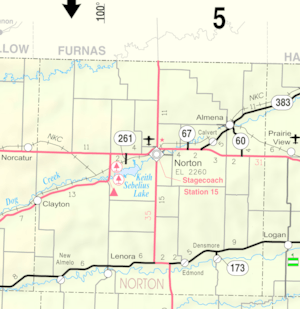 Norton County is divided into four townships. The city of Norton is considered governmentally independent and is excluded from the census figures for the townships. In the following table, the population center is the largest city (or cities) included in that township's population total, if it is of a significant size. The 2010 census shows the area of the former Harrison-District 6 as combined into that of Almena-District 4.

All content from Kiddle encyclopedia articles (including the article images and facts) can be freely used under Attribution-ShareAlike license, unless stated otherwise. Cite this article:
Norton County, Kansas Facts for Kids. Kiddle Encyclopedia.