Graham County (county code GH) is a county located in the U.S. state of Kansas. As of the 2010 census, the county population was 2,597. Its county seat and most populous city is Hill City. The county is home to Nicodemus, founded 1877, which is the only remaining western town established by African Americans during the Reconstruction Period following the American Civil War.

Graham County roughly contains 3600 quarter sections, and is the fourth county east of Colorado line and the second county south of the Nebraska line. The 100th meridian west passes nearly through its center. The average elevation in the county is 2,700 feet (820 m) above sea level. It is intersected by the south fork of Solomon River, and drained by Saline River. 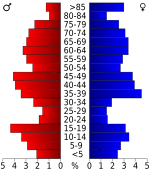 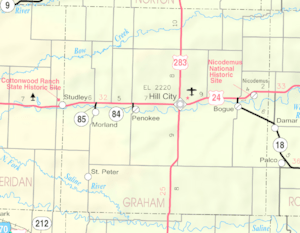 Graham County is divided into thirteen townships. None of the cities within the county are considered governmentally independent, and all figures for the townships include those of the cities. In the following table, the population center is the largest city (or cities) included in that township's population total, if it is of a significant size.

All content from Kiddle encyclopedia articles (including the article images and facts) can be freely used under Attribution-ShareAlike license, unless stated otherwise. Cite this article:
Graham County, Kansas Facts for Kids. Kiddle Encyclopedia.