Decatur County (county code DC) is a county located in Northwest Kansas. As of the 2010 census, the county population was 2,961. Its county seat and most populous city is Oberlin. The county is named in honor of Commodore Stephen Decatur, Jr.

In 1854, the Kansas Territory was organized, then in 1861 Kansas became the 34th U.S. state. Decatur County was established March 20, 1873 and organized on December 15, 1879. It is named for the Navy war hero Commodore Stephen Decatur, Jr., who served during the First Barbary War and the Second Barbary War and the War of 1812.

Oberlin was the site of the last Native American (specifically the Northern Cheyenne) Raid in Kansas. 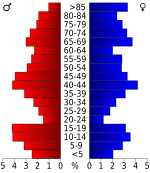 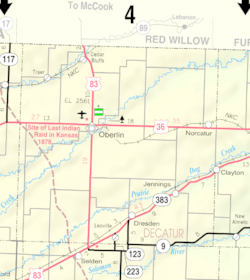 Decatur County is divided into twenty-five townships. The city of Oberlin is considered governmentally independent and is excluded from the census figures for the townships. In the following table, the population center is the largest city (or cities) included in that township's population total, if it is of a significant size.

All content from Kiddle encyclopedia articles (including the article images and facts) can be freely used under Attribution-ShareAlike license, unless stated otherwise. Cite this article:
Decatur County, Kansas Facts for Kids. Kiddle Encyclopedia.