Kids Encyclopedia Facts
Not to be confused with Dallas County, Texas.

Dallam County is a county located in the northwestern corner of the U.S. state of Texas. As of the 2010 census, its population was 6,703. Its county seat is Dalhart. The county was founded in 1876 and later organized in 1891. It is named for James Wilmer Dallam, a lawyer and newspaper publisher.

Dallam is the northernmost of the ten Texas counties that from 1885–1912 constituted the legendary XIT Ranch. The ranch is still celebrated through the XIT Museum in Dalhart and the annual XIT Rodeo and Reunion held the first long weekend in August.

Dallam County was formed in 1876 from portions of Bexar County. It was named after James Wilmer Dallam, the lawyer who made the first digest of Texas laws. The first settlement in the area followed in 1870, which resulted in the Red River War of 1874 and 1875 with the native Comanche and Kiowa tribes. In 1900-01, the Chicago, Rock Island and Pacific Railroad company built a stretch from Enid, Oklahoma to Tucumcari, New Mexico, which ran through the county. The location where the tracks met those of the Fort Worth and Denver Railway was named Dalhart. The name is taken from the first letters of Dallam County and Hartley County, between which the town's area is divided. Within a short time, the small railroad stop turned into a sizable town and was named county seat in 1903.

Dallam County was one of the hardest hit areas in the Dust Bowl. 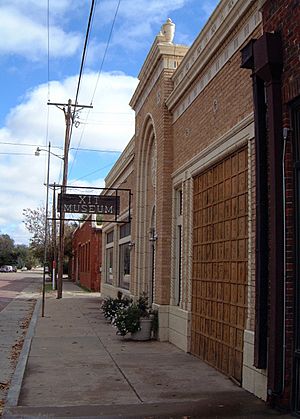 The XIT Museum in Dalhart.

All content from Kiddle encyclopedia articles (including the article images and facts) can be freely used under Attribution-ShareAlike license, unless stated otherwise. Cite this article:
Dallam County, Texas Facts for Kids. Kiddle Encyclopedia.