Dalhart is a city in Dallam and Hartley counties in the U.S. state of Texas, and the county seat of Dallam County. The population was 7,930 at the 2010 census. 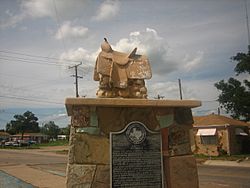 The Empty Saddle Monument at the crossroads of Dalhart (U.S. Highways 87, 385, and 54) has honored the memory of the cowboys of the defunct XIT Ranch.

Founded in 1901, Dalhart is named for its location on the border of Dallam and Hartley counties; its name is a portmanteau of the names of the two counties. The city was founded at the site of a railroad junction, which heavily contributed to its early growth.

Dalhart was in the center of the Dust Bowl, an area adversely affected by a long period of drought and dust storms during the Great Depression of the 1930s. It was here that Tex Thornton operating on the now debunked concussion theory coaxed today's inflation-adjusted equivalent of $1 million from the locals on claims he could fire rocket-powered explosives into the clouds and cause rain.

At the Dallam County Courthouse, Dalhart honors the memory of James R. Fox, Jr. (March 16, 1919—March 11, 1943), who flew supplies to China for Pan American Airways, then a joint Chinese and American company, during World War II through the treacherous Hump Route. Fox and his two Chinese copilots were killed when their Douglas C-52 cargo plane crashed. In 2002, the Peoples Republic of China made a bronze bust in Fox's honor and presented it to Dalhart.

In December 2015, the Seattle Post-Intelligencer voted Dalhart No. 8 of the ten "most conservative" cities in the United States in regard to campaign contributions. Other West Texas communities in the most conservative lineup are Hereford (No. 1), Monahans (No. 5), and Childress (No. 9). In contrast, El Cerrito, California, was named the "most liberal" city in the nation regarding political donations.

In 2010, 9.9% of the population identified as being foreign-born, with 25.4% of households in Dalhart speaking a primary language other than English at home. Data demonstrated that 79.6% of residents over 25 had earned at least a High School Diploma, while 16.4% had obtained a bachelor's degree or higher.

Dalhart is known as the "XIT City" because of its relationship with the historic XIT Ranch. The ranch was a 3,000,000-acre (12,000 km2) plot of land traded in exchange for the construction of the Texas State Capitol in Austin. The ranch was dissolved in 1912, but its history is celebrated with the city's XIT Museum and the XIT Rodeo and Reunion. Held annually on the first full Thursday through Sunday weekend of August, the event includes the world's largest free barbecue, junior rodeo as well as Professional Rodeo Cowboys Association events, and three nights of live music. The Empty Saddle Monument, located at the crossroads of Dalhart, was constructed in 1940 at the request of Bobby Dycke, the wife of a ranch hand, to recognize the contribution of the XIT cowboys to the history of the region.

The Muscle Car Party Weekend is held each year in May, and includes a classic car show, bicycle drag races and dinner and dance. The events are sponsored by the Dalhart Cruzers Car Club, and each year the club raffles a classic car.

All content from Kiddle encyclopedia articles (including the article images and facts) can be freely used under Attribution-ShareAlike license, unless stated otherwise. Cite this article:
Dalhart, Texas Facts for Kids. Kiddle Encyclopedia.