Boise City was founded in 1908 by developers J. E. Stanley, A. J. Kline, and W. T. Douglas (all doing business as the Southwestern Immigration and Development Company of Guthrie, Oklahoma) and who published and distributed brochures promoting the town as an elegant, tree-lined city with paved streets, numerous businesses, railroad service, and an artesian well. They sold 3,000 lots to buyers who discovered, on their arrival, that none of the information in the brochure was true. In addition to using false publicity, the three men did not have title to the lots they sold. Stanley and Kline were convicted of mail fraud and sent to Leavenworth Federal Penitentiary. Stanley and Kline served two year terms in the penitentiary. Douglas died of tuberculosis before beginning his sentence. The town nevertheless took shape and incorporated on July 20, 1925.

The Encyclopedia of Oklahoma History and Culture says that the origin of the town name is unclear, but offers three possibilities: (1) a Captain Boice who was a hero in the Civil War, (2) the town of Boise, Idaho or (3) the Boise Cattle Company, which ran cattle in the area.

Boise City's prosperity in the 1930s was severely affected by its location at the heart of the Dust Bowl region.

Boise City was the location of an unusual event during World War II when it was mistakenly bombed by a friendly U.S. bomber crew during training. The bombing occurred on July 5, 1943, at approximately 12:30 a.m. by a B‑17 Flying Fortress Bomber. This occurred because pilots performing target practice became disoriented and mistook the lights around the town square as their target. No one was killed in the attack (only practice bombs were used and the square was deserted at the time), but the pilots were embarrassed. For the 50th anniversary of the incident, the crew of the bomber was invited back to Boise City, but all members declined. The former radio operator did, however, send an audio tape that was played at the celebration.

From Boise City, one can drive to four other states (Colorado, Kansas, New Mexico, and Texas) in under an hour.

According weather data tallied between July 1, 1985 and June 30, 2015 for every location in the National Oceanic and Atmospheric Administration's official climate database, Boise City, Oklahoma, is the snowiest place in the state of Oklahoma with an average of 30.8 inches of snow per year.

There were 610 households, out of which 29.8% had children under the age of 18 living with them, 55.1% were married couples living together, 7.5% had a female householder with no husband present, and 34.3% were non-families. 33.1% of all households were made up of individuals, and 18.4% had someone living alone who was 65 years of age or older. The average household size was 2.36 and the average family size was 2.99.

The local economy is based on ranching, farming, and the production of oil and natural gas.

The local paper, starting as the Cimarron News in 1898 in Kenton, Oklahoma, has been known as The Boise City News since 1930. Calling itself The Official Newspaper of Cimarron County, it is available in both print and digital editions. 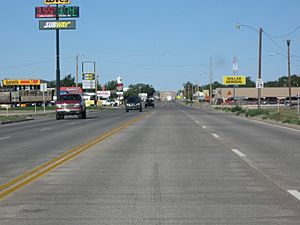 The Boise City Airport, which serves all of the county, is located approximately six miles north of the town center.

All content from Kiddle encyclopedia articles (including the article images and facts) can be freely used under Attribution-ShareAlike license, unless stated otherwise. Cite this article:
Boise City, Oklahoma Facts for Kids. Kiddle Encyclopedia.