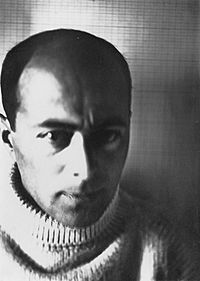 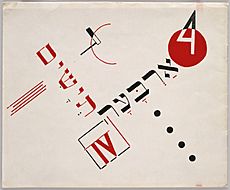 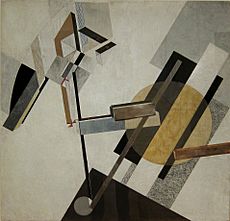 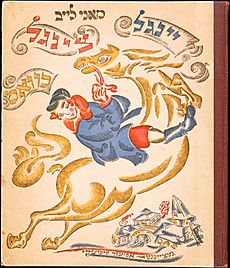 He was an important figure of the Russian avant-garde, helping develop suprematism with his mentor, Kazimir Malevich. He designed exhibition displays and propaganda works for the former Soviet Union. His work greatly influenced the Bauhaus and constructivist movements, and he experimented with techniques and ideas ine 20th-century graphic design.

El Lissitzky's entire career was based on his belief that the artist could be an agent for change. Lissitzky, who was Jewish, began his career illustrating Yiddish children's books. This was to promote Jewish culture in Russia, which had just ended its antisemitic laws. He started teaching at 15; and taught throughout his life. Over the years, he taught in a variety of positions, schools and artistic media, spreading and exchanging ideas.

He took this ethic with him when he worked with Malevich in the art group UNOVIS and when he worked his own. He took up a job as the Russian cultural ambassador to Weimar Germany. There he worked with important figures of the Bauhaus and De Stijl movements. In his remaining years he brought innovation and change to typography, exhibition design, photomontage, and book design. He produced critically respected works and won international acclaim for his exhibition design. This continued to the end of his life. In 1941 he produced one of his last works – a Soviet propaganda poster rallying the people to make more tanks for the fight against Nazi Germany. 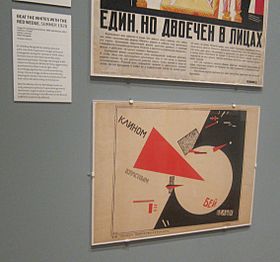 Famous pro-communist propaganda poster by Lissitzky: Beat the Whites with the Red Wedge

All content from Kiddle encyclopedia articles (including the article images and facts) can be freely used under Attribution-ShareAlike license, unless stated otherwise. Cite this article:
El Lissitzky Facts for Kids. Kiddle Encyclopedia.