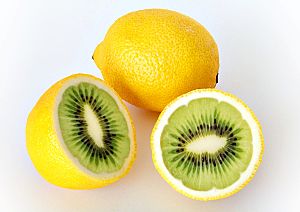 Photomontage is the process and the result of making a composite photograph by cutting, gluing, rearranging and overlapping two or more photographs into a new image. Sometimes the resulting composite image is photographed so that a final image may appear as a seamless photographic print. A similar method, although one that does not use film, is realized today through image-editing software. This latter technique is referred to by professionals as "compositing", and in casual usage is often called "photoshopping" (from the name of the popular software system). A composite of related photographs to extend a view of a single scene or subject would not be labeled as a montage.

All content from Kiddle encyclopedia articles (including the article images and facts) can be freely used under Attribution-ShareAlike license, unless stated otherwise. Cite this article:
Photomontage Facts for Kids. Kiddle Encyclopedia.