The Eli and Edythe Broad Art Museum (colloquially MSU Broad, not to be confused with The Broad in Los Angeles), is a contemporary art museum at Michigan State University in East Lansing, Michigan. It opened on November 10, 2012. 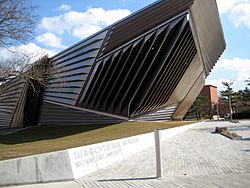 On June 1, 2007, Michigan State received a $28 million donation from businessman Eli Broad and his wife, Edythe, for the construction of a new art museum, to replace the old Kresge Art Museum in the school's art building. At their June 15 meeting, the MSU Board of Trustees approved the construction of the museum with initial plans to demolish the building then in the proposed location, the Paolucci Building. Michael Rush was named as the founding director in December 2010. Michael Rush died of pancreatic cancer on March 27, 2015. Marc-Olivier Wahler was named the director on March 9, 2016. 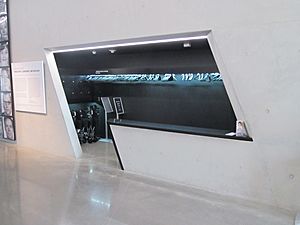 Even the coat room carries an angular design. 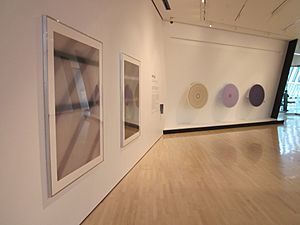 One of the galleries.

Following the approval of the museum there were initially 10 semifinalist firms identified from a field of approximately 30 firms. From the list of semifinalists, five architectural firms were selected to submit competition proposals. The proposed building was to include a minimum of 26,000 square feet (2,400 m2) of gallery space and would accommodate both permanent and temporary exhibitions. The new facilities would allow MSU’s art museum to offer educational opportunities and programming such as lectures by visiting scholars, curators, artists and faculty; seminars, docent training; and special activities for families and school groups. The five finalists were:

The selection committee announced on January 15, 2008, that Zaha Hadid had been selected.

Construction on the museum began March 16, 2010, at a groundbreaking ceremony attended by Eli Broad and Zaha Hadid. Originally scheduled to open April 21, 2012, the official dedication was delayed until November due to "a combination of material supply delays and the priority placed on involving students in opening activities".

The angular facade is composed of pleated stainless steel and glass and was conceived to give the building "an ever-changing appearance that arouses curiosity yet never quite reveals its content." (Zaha Hadid Architects). Seventy percent of the 46,000 square feet (4,300 m2) is dedicated to exhibition space. 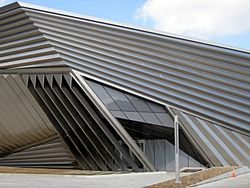 The museum also includes an educational facility, a works on paper study center, administration offices, a café and a shop; as well as a pedestrian plaza and a sculpture garden.

According to an economic study published by the Anderson Economic Group, the museum was projected to generate approximately $5.75 million per year in new spending into the regional economy. Specifically, the study predicted that visitors would spend:

"We fully expect to be a significant contributor to our local economic engine", said Michael Rush, founding director of the Broad Museum. The museum "will generate new opportunities for existing businesses and potentially new businesses", the report noted, adding that it "is likely to attract visitors with relatively high incomes, high levels of education, and tastes and preferences…"

All content from Kiddle encyclopedia articles (including the article images and facts) can be freely used under Attribution-ShareAlike license, unless stated otherwise. Cite this article:
Eli and Edythe Broad Art Museum Facts for Kids. Kiddle Encyclopedia.