The Glasgow Museum of Transport in Glasgow, Scotland was established in 1964 and initially located at a former tram depot in Pollokshields. In 1987 the museum was relocated to the city's Kelvin Hall, then moved to its current location in the Riverside Museum building at Glasgow Harbour in 2011.

The Museum of Transport was first established in 1964. Created in the wake of the closure of Glasgow's tramway system in 1962, it was initially located at the former Coplawhill tram depot on Albert Drive in Pollokshields, before moving to the Kelvin Hall. The old building was subsequently converted into the Tramway arts centre.

The museum was then situated inside the Kelvin Hall opposite the Kelvingrove Art Gallery and Museum in the West End of Glasgow. The Kelvin Hall was built in 1927, originally as an exhibition centre, but was converted in 1987 to house the Museum of Transport and the Kelvin Hall International Sports Arena.

The Kelvin Hall site itself closed in April 2010, with the Museum moving to its third home at the new Riverside Museum in 2011. 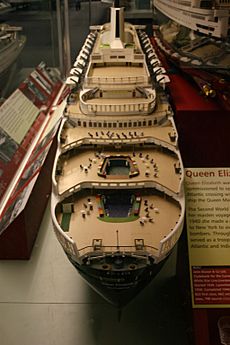 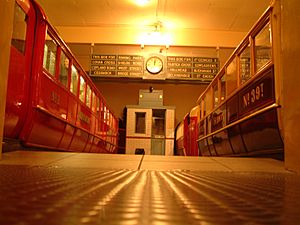 The Museum of Transport in the Kelvin Hall was one of the most popular museums of transport in the United Kingdom, attracting half a million visitors a year, and housed many exhibits of national and international importance.

The museum housed the oldest surviving pedal cycle and the world's leading collection of Scottish-built cars and trucks, including pioneering examples from Scottish manufacturers Argyll, Arrol-Johnston and Albion. More modern Scottish-built cars, namely the Rootes Group's Hillman Imp, Chrysler Avenger and Chrysler Sunbeam were represented too along with many other motorcars in a large showroom-type display sponsored by Arnold Clark.

All forms of transport were featured, from horse-drawn vehicles to fire engines, from motorcycles to caravans, even toy cars and prams.

In the Clyde Room was a display of some 250 ship models, representing the contribution of the River Clyde and its shipbuilders and engineers to maritime trade and the Royal Navy, including the Comet of 1812, the Hood, the Howe, the Queen Mary, and the Queen Elizabeth and the QE2.

Locomotive manufacture was also an important Glasgow industry and the museum celebrated the city's railway heritage, including locomotives such as: 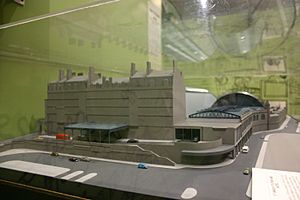 Other main exhibits displayed the evolution of Glasgow's public transport system and included seven Glasgow Corporation Tramways tramcars from different eras, Glasgow Corporation Trolleybuses, and the reconstruction of "Kelvin Street", which aimed to recapture the atmosphere of 1930s Glasgow, including full-scale replicas of a pre-1977 Glasgow Subway station and the Regal Cinema, which played Scottish transport documentaries such as Seawards the Great Ships.

The museum at Kelvin Hall closed on 18 April 2010, with most of its collections moved to the new purpose-built Riverside Museum in Glasgow Harbour on the Clyde, designed by Zaha Hadid Architects and engineers Buro Happold. The new museum opened on Tuesday 21 June 2011.

All content from Kiddle encyclopedia articles (including the article images and facts) can be freely used under Attribution-ShareAlike license, unless stated otherwise. Cite this article:
Glasgow Museum of Transport Facts for Kids. Kiddle Encyclopedia.