Culture in Glasgow facts for kids

The city of Glasgow, Scotland, has many amenities for a wide range of cultural activities, from curling to opera and from football to art appreciation; it also has a large selection of museums that include those devoted to transport, religion, and modern art. In 2009 Glasgow was awarded the title UNESCO Creative City of Music in recognition of its vibrant live music scene and its distinguished heritage. Glasgow has three major universities, each involved in creative and literary arts, and the city has the largest public reference library in Europe in the form of the Mitchell Library. Scotland's largest newspapers and national television and radio companies are based in the city.

The Kelvingrove Art Gallery and Museum houses renowned art work and paintings including many old masters, Dutch, Italian, French Impressionists, etc. and the Scottish Colourists, and Glasgow Boys. The Hunterian Museum and Art Gallery, of the University of Glasgow, has what is considered to be the best collection of Whistler paintings in the world. The Burrell Collection of international art and antiquities donated to the city by Sir William Burrell is housed in an award-winning museum in the Pollok Country Park. The People's Palace museum in Glasgow Green reflects the history of the city and its people, focusing on the working class of Glasgow. The Riverside Museum on the Clyde focuses on shipping, transport and city life. Glasgow School of Art designed by Charles Rennie Mackintosh continues its pre-eminence in art, design and architecture, including its Digital Design Studio across the River Clyde in Pacific Quay. The Gallery of Modern Art is on Royal Exchange Square, just off George Square. 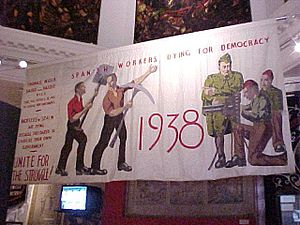 Glasgow's museums and galleries include:

Glasgow has 32 community libraries across the city, run by Glasgow Life.

Glasgow has over 100 parks, gardens, recreational areas, green spaces and cemeteries across its area. Glasgow City Council manages a great number of these.

As part of Glasgow's cultural renaissance, Glasgow is host to a variety of festivals throughout the year:-

The city was host to the three Great Exhibitions at Kelvingrove Park, in 1888 (International Exhibition (1888)), 1901 (Glasgow International Exhibition (1901)) and 1911 (Scottish Exhibition, Art and Industry). It later hosted the Empire Exhibition in 1938 and the Industrial exhibits of the Festival of Britain at the Kelvin Hall in 1951. More recently it held the Glasgow Garden Festival in 1988 and was European Capital of Culture in 1990, National City of Sport 1995-1999, UK City of Architecture and Design 1999 and European Capital of Sport 2003. The city hosted the 2014 Commonwealth Games.

Glasgow was awarded the title UNESCO City of Music in recognition of its live music scene.

Glasgow has many live music pubs, clubs and venues. Some of the city's main venues include the Glasgow Royal Concert Hall, the SECC and King Tut's Wah Wah Hut (where Oasis were spotted and signed by Glaswegian record mogul Alan McGee), the Queen Margaret Union and the Barrowland, a historic ballroom, converted into a live music venue. More recent mid-sized venues include ABC, Stereo, The Old Hairdressers and the Carling Academy, which play host to a similar range of acts. Numerous small venues, cafes and bars play host to the many smaller local and touring bands which regularly play in the city.

Glasgow is also home to a thriving electronic music scene, with a particularly strong reputation for techno and house music. Venues like the Arches and the Sub Club, record labels such as Soma and Chemikal Underground and clubnights such as Optimo have supported this strong underground movement for the past two decades in the city.

The city also boasts a flourishing experimental music scene, and plays home to such luminaries as Alex Neilson and Richard Youngs. Glasgow hosts the long-running Install and Subcurrent annual festivals, which have featured underground luminaries such as Gustav Metzger and Tony Conrad, as well as reclusive American musician Jandek's first ever live performance. The Soundlab season at Glasgow Concert Halls presents excellent Scottish and international artists; while the MINIMAL GLASGOW season features major names like Steve Reich and Philip Glass alongside up and coming acts.

A known noise rock act from Glasgow in the late nineties was Urusei Yatsura. In recent years, the success of bands such as Chvrches, Franz Ferdinand, Belle & Sebastian, Camera Obscura and Mogwai has significantly boosted the profile of the Glasgow music scene, prompting Time Magazine to liken Glasgow to Detroit during its 1960s Motown heyday.

All content from Kiddle encyclopedia articles (including the article images and facts) can be freely used under Attribution-ShareAlike license, unless stated otherwise. Cite this article:
Culture in Glasgow Facts for Kids. Kiddle Encyclopedia.