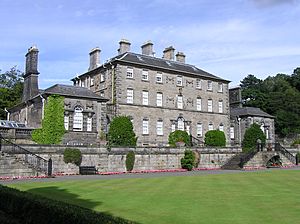 The house – built in 1752 and originally thought to be designed by William Adam, but who may only have been consulted on the design, was subsequently extended by Rowand Anderson in the early 20th century – was gifted to the City of Glasgow in 1966 by Dame Anne Maxwell Macdonald, whose family had owned the estate for almost 700 years. It is now managed by the National Trust for Scotland and is open to the public. The house was modernised internally in 1899 by Alexander Hunter Crawford. 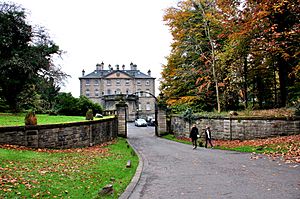 Displayed within the Pollok House is a large, private collection of Spanish paintings, including works by El Greco, Francisco Goya and Bartolomé Esteban Murillo. There are also paintings by Rubens and William Blake as well as glass, silverware, porcelain and antique furniture. The house also features servants' quarters downstairs (accessible free of charge), which include two shops and a restaurant. 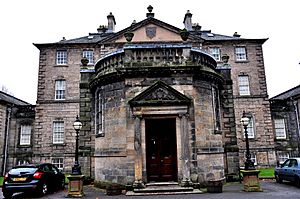 The house also has an extensive garden, boasting a collection of over 1,000 species of rhododendrons. The gardens behind the main house contain the Pollok Park Beech (Fagus sylvatical) which is thought to be 250 years old. This tree has an unusual form with a swollen trunk (7 metres (23 ft) girth at grade and (10 metres (33 ft) girth at (10 metres (33 ft) height) and a gnarled mass of branches. There is also a complex of offices, stables and a sawmill, part of which dates from the 18th century. The stone arch bridge leading to the house over the White Cart Water was constructed in 1757.

The heraldic lions on the gate piers were carved by John Marshall to a design by Huw Lorimer in 1950.

All content from Kiddle encyclopedia articles (including the article images and facts) can be freely used under Attribution-ShareAlike license, unless stated otherwise. Cite this article:
Pollok House Facts for Kids. Kiddle Encyclopedia.