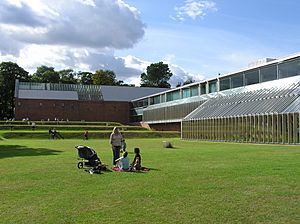 The museum building housing the Burrell Collection, with the entrance wing in the background to the left, and the glazed restaurant on the right looking onto the lawn

The Burrell Collection is an art collection in the city of Glasgow, Scotland. It is situated in Pollok Country Park on the south side of the city. The museum closed for refurbishment on 23 October 2016 and was due to reopen in 2020. However, Glasgow Life confirmed in July 2019 that it would be spring 2021 before the re-opening takes place In September 2020, Glasgow Life announced that this date is being "revised". Scottish Labour said it did not expect the Gallery to re-open before 2022. 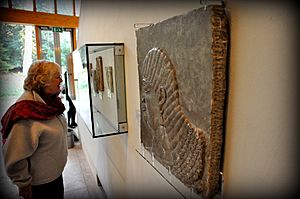 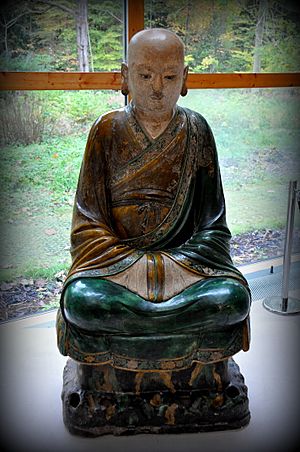 Figure of a Luohan from the Chenghua period

The eclectic collection was acquired over many years by Sir William Burrell, a wealthy Glaswegian shipping magnate and art collector, who then gave it to the city of Glasgow Corporation in 1944. The gift was made on the condition that the collection was to be housed in a building 16 miles (26 km) from the centre of Glasgow, to show the works to their greatest advantage, and to avoid the damaging effects of air pollution at the time. The trustees spent over 20 years trying to find a suitable 'home' for the collection, one which met all the criteria set out in the Trust Deed, without success. Eventually, when the Pollok Estate was given to the city in 1967, the Trustees had certain terms of the deed waived, which allowed the current site, 3 miles (5 km) from the city centre and within the city boundaries, to be chosen for the collection.

A design competition for the museum building in 1971 was delayed by a postal strike, allowing time for the eventual winning architect Barry Gasson to complete his entry, designed in collaboration with John Meunier and Brit Andresen.

The building is L-shaped in plan and is specifically tailored to house and display the diverse collection, with larger pieces such as Romanesque doorways built into the structure, at the same time giving views out into the park over formal grassed areas to the south, and into adjacent woodland to the north.

The entrance, through a 16th-century stone archway built into a modern red sandstone gable, leads to a shop and other facilities, then on to a central courtyard under a glazed roof, adjacent to the reconstructions of three rooms from the Burrell's home, Hutton Castle near Berwick-on-Tweed: the wood panelled drawing room, hall, and dining room complete with their furnishings. Galleries on two levels house various smaller artefacts, over a basement storage level, and at the lower level a restaurant gives views over the lawn to the south.

The museum was opened by Queen Elizabeth II in 1983, and was named as Scotland's second greatest post-war building (after Gillespie, Kidd & Coia's St Peter's Seminary) in a poll of architects by Prospect magazine in 2005.

The building was awarded A-listed status by Historic Scotland in February 2013 in recognition of its position as one of the country’s finest examples of 1970s architectural design. 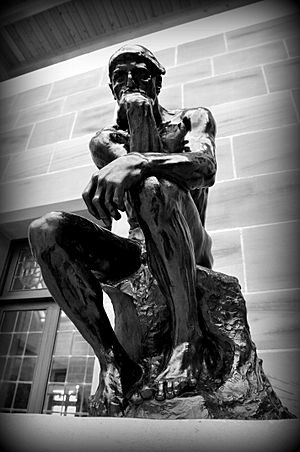 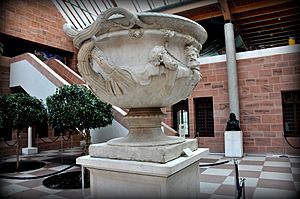 The Warwick Vase from Hadrian's Villa

The Burrell contains an important collection of medieval art including stained glass and tapestries, oak furniture, medieval weapons and armour, Islamic art, artefacts from ancient Egypt and China, Impressionist works by Degas and Cézanne, modern sculpture and a host of other artefacts from around the world, all collected by one man. There are over 8,000 objects in the collection. Artworks from five centuries are found in the collection.

Islamic antiques donated by Burrell to the museum include: Hispano-Moresque lustreware, ceramics and carpets from Iran and the Mughal Empire, as well as embroideries and textiles from Turkey and Uzbekistan. 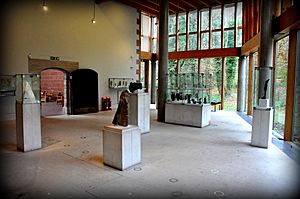 The museum is home to one of the greatest assemblies of medieval stained glass in the world. There are more than 700 stained glass panels from across Europe in the collection, including many examples of Gothic, Renaissance, and Romanesque styles. Much of the glass has heraldic motifs.

In 2013, a project was commenced to conserve and research the museum's collection of stained glass from the Carmelite church at Boppard-am-Rhein, Germany. The 34 panels that make up the Burrell collection of Boppard windows have a combined surface area of 14 square metres.

The museum has a collection of religious art from the medieval period. This includes wood and stone sculptures, wooden church furnishings and architectural fragments. One of these items is the Temple Pyx.

The estate of Emma Budge, a Jewish art collector whose artworks were seized by the Nazis, discovered a 16th century tapestry from the Budge collection at the Burrell. After the UK Spoliation Advisory Panel issued a recommendation, the Burrell collection reached a settlement with the estate.

Pollok House, administered by the National Trust for Scotland, is also situated in Pollok Country Park.

All content from Kiddle encyclopedia articles (including the article images and facts) can be freely used under Attribution-ShareAlike license, unless stated otherwise. Cite this article:
Burrell Collection Facts for Kids. Kiddle Encyclopedia.