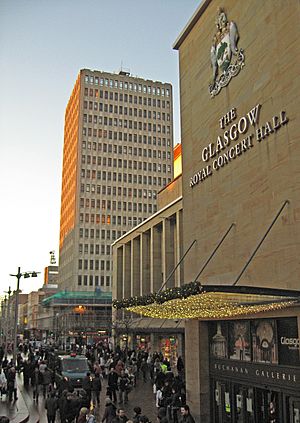 Planned as the Glasgow International Concert Hall, the Royal Concert Hall is one of the largest halls in the United Kingdom. It was officially opened in October 1990.

It is the replacement for the acclaimed St. Andrews Hall, adjacent to the Mitchell Library, which had been destroyed by fire in 1962, and was promoted and constructed in time for the city being recognised in the 1980s as the European City of Culture. The Concert Hall stands at the junction of Buchanan Street and Sauchiehall Street with a performers` entrance in West Nile Street, and public entrances in Buchanan street and in Killermont Street, with the RSNO Centre added in later years. The development also anticipated the adjacent major shopping mall, which opened as the Buchanan Galleries a decade later. The auditorium area is insulated by a massive rubber membrane built into the floor - damping out noise and vibration from the Subway tracks which run underneath.

The Glasgow International Concert Hall was officially opened on 5 October 1990, by Her Royal Highness The Princess Royal. The Royal Scottish National Orchestra (then the Scottish National Orchestra) gave the very first performance at the Royal Gala Opening Concert, as a showpiece for Glasgow being awarded the European City of Culture. The programme featured two new works by Scottish composers, Carillon by Thomas Wilson and Rainbow 90 by Thea Musgrave, both specially commissioned for the occasion by Glasgow City Council, as well as pieces by Beethoven and Vaughan Williams. On the day prior, public concerts were given by the Band of Her Majesty's Royal Marines, with proceeds being donated to the RNLI, which also demonstrated how the stage and the floor levels can be changed to suit performances. The first non-classical concert was by The Blue Nile. The hall has been granted Royal Status and renamed Glasgow Royal Concert Hall.

The building was designed by modernist architect Sir Leslie Martin of South Bank, London, with the Edinburgh-based company RMJM and partners as project architects in 1988.

The Green Room, formerly a fine-dining room, was restyled in 2009 and renamed "The City of Music Studio" to celebrate Glasgow's UNESCO City of Music status. The City of Music Studio is known for the view overlooking Buchanan Street and its late night jazz programme. The Cafe Bar was re-branded and refurbished in 2011 as Café Encore following Encore's takeover of the catering department.

A bespoke four manual Copeman Hart digital organ and associated speakers was permanently installed in the Hall in July 2015.

The Hall is the Glasgow performance base of the Royal Scottish National Orchestra and has hosted many international orchestras, soloists and conductors, including the Royal Concertgebouw Orchestra, the St. Petersburg Philharmonic Orchestra, National Youth Orchestras of Great Britain, Scotland and Jazz at Lincoln Center Orchestra, Celia Bartoli, Julian Lloyd Webber and Maxim Vengerov.

As well as classical music, the hall plays host to opera and ballet, musical theatre, talks, rock and pop, folk, world and country, swing and comedy. It also exhibits art and photographic exhibitions, and is the venue for graduation ceremonies for the adjacent Glasgow Caledonian University.

On Sunday 9 October 1993 Nelson Mandela chose Glasgow as the place to formally receive the first of his freedoms of nine British cities. He entered the Hall to a choral rendition of Down by the Riverside and received a standing ovation. In 1994 Bob Hope took to the stage to commemorate the 50th anniversary of the D-Daylandings.

The Hall is the main venue for the annual Celtic Connections Festival, and is one of the venues for the city's Aye Write Book Festival.

All content from Kiddle encyclopedia articles (including the article images and facts) can be freely used under Attribution-ShareAlike license, unless stated otherwise. Cite this article:
Glasgow Royal Concert Hall Facts for Kids. Kiddle Encyclopedia.