Buchanan Street is one of the main shopping thoroughfares in Glasgow, the largest city in Scotland. It forms the central stretch of Glasgow's famous shopping district with a generally more upmarket range of shops than the neighbouring streets: Argyle Street, and Sauchiehall Street. 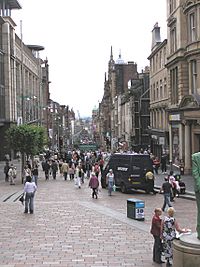 Buchanan Street was first feued in 1777 and named after a wealthy Tobacco Lord, plantation owner and former Lord Provost of Glasgow, Andrew Buchanan of Buchanan, Hastie, & Co. He was proprietor of the ground on which it was formed from Argyle Street as far north as Gordon Street. Andrew had died in 1759 and his tobacco empire was inherited by his son James Buchanan of Drumpellier (also twice Lord Provost of Glasgow). The family made huge losses following the American Revolution of 1776, losing all their plantations in Virginia. The family members moved into textile manufacturing and industrial expansion. Sale of the land was probably at least in part to offset these initial losses. Palladian villas, similar to those of the 18th century in Argyle Street, Miller Street and Queen Street were erected along with other terraced townhouses from the 1790s onwards, similar to the new George Square and new Royal Exchange Square. Shops, hotels, banks, offices and clubs soon followed including the Western Club and the Athenaeum, later known as the Royal Scottish Academy of Music & Drama, linking through from St George's Place. Westward of Buchanan Street the development of Blythswood Hill and Blythswood Square by William Harley and others followed apace.

Buchanan Bus Station was opened beyond the top of the street in 1978, at the same time as the street itself was pedestrianised between Bath Street and Argyle Street. The closure of the Glasgow NAAFI at Parliamentary Road after WWII and the old railway station was addressed in the 1980s by the construction of the Glasgow Royal Concert Hall, opening in 1990, and the adjoining Buchanan Galleries shopping mall in 1999. Also in 1999, the entire street was repaved with high quality granite stonework and striking blue neon lighting. The combination of impressive Victorian architecture and modern urban design won Buchanan Street the Academy of Urbanism 'Great Street Award' 2008, beating both O'Connell Street in Dublin and Regent Street/Portland Place, London. The area between Argyle Street and St. Vincent Street is particularly popular with buskers.

In May 2002, then-Prime Minister Tony Blair unveiled a statue of the late-First Minister of Scotland Donald Dewar at the northern end of the street, the only statue in the street. On the west side across from Buchanan Galleries a further major development of shops and housing opened in 2013 stretching through to West Nile Street at Bath Street. 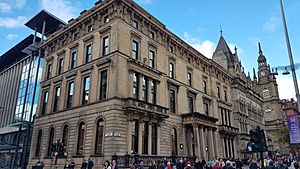 At the start of the street where it meets Argyle Street and St Enoch Square the historic Argyll Arcade which opened in 1827 with sixty-three shops and is now the oldest Victorian shopping centre in Britain, and its near neighbour award-winning Princes Square indoor mall face across to the stores which make up the iconic House of Fraser - which started in Glasgow and also owned Harrods of London. Buchanan Street is now entirely pedestrianised, but the streets that cross it (St. Vincent Street, George Street and Bath Street) are not.

In the middle, Royal Exchange Square opens out through to Queen Street. Buchanan Street is met by Nelson Mandela Place, which was renamed by the Labour city council from St George's Place, the address of the South African Consulate, as a protest to the African National Congress (ANC) activist Nelson Mandela being a political prisoner of the South African apartheid government at the time. On his release, Glasgow was the first city in the United Kingdom to honour him with the Freedom of the City, October 1993.

At its north end, meeting Sauchiehall Street, are the Buchanan Galleries and the Glasgow Royal Concert Hall, which includes the home of the Royal Scottish National Orchestra. 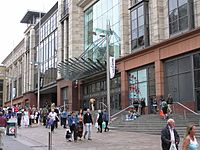 Buchanan Galleries, located at the north end of Buchanan Street. 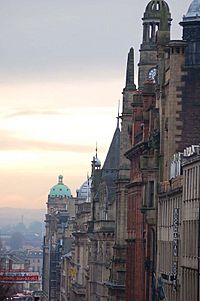 Buchanan Street is renowned for its variety in high street shopping, including flagship stores, with rents on the street being as much as £250 per square foot, making it the 6th most expensive street in the United Kingdom for retail rent, only surpassed by 5 streets in London. Buchanan Street is also the second busiest shopping thoroughfare, second only to Oxford Street in London. Glasgow has been recognised for being the second best shopping destination in the United Kingdom, after London, since 2008.

All content from Kiddle encyclopedia articles (including the article images and facts) can be freely used under Attribution-ShareAlike license, unless stated otherwise. Cite this article:
Buchanan Street Facts for Kids. Kiddle Encyclopedia.