The St George's Tron Church, in Glasgow, Scotland, is a Church of Scotland church in the city centre, located in Nelson Mandela Place, previously known as St George's Place, fronting Buchanan Street at West George Street, along from Queen Street Station. It should not be confused with the 17th-century Tron Church, which lies to the south-west on Trongate and was redeveloped in the 1980s as the Tron Theatre. Located right on the busiest shopping street in Scotland (Buchanan Street), the building is a significant presence, and the oldest in the area. It stands as a terminating vista for West George Street.

The church opened in 1808, originally as St. George's Parish Church, with the original congregation originating from the Wynd Church in the Merchant City near to the Trongate. In 1815 Thomas Chalmers, later to be the leader of the evangelical party in the disruption of 1843, became minister of the church. A merger with the Tron St Anne congregation (previously of the Laigh Kirk on Trongate) in 1940 led to the compound St George's Tron name coming into use.

A notable minister of the parish was Tom Allan, a key figure in the Scottish evangelical movement of the mid-20th century. Tom Allan died of a heart attack in 1965. His ministry was followed by that of George Baillie Duncan who developed a strong emphasis on biblical preaching and teaching and who served from 1965 to 1977. Another notable minister, also an evangelical, was Eric Alexander, who served from 1977 to 1997 as was Sinclair Ferguson who served in the late 1990s and early 2000s.

In 2004 Rev Dr William J. U. Philip became minister of the congregation, following a five-year term as Director of Ministry with the Proclamation Trust. During his ministry he oversaw the establishment of Cornhill Scotland, a training organisation for preachers and teachers of the Bible.

In 2012 Philip and all of the 500 members of the congregation left the Church of Scotland over the ongoing discussions within the Church of whether to permit openly gay clergy, which the congregation saw as the Church of Scotland rejecting the Authority of Scripture. There was controversy after messengers-at-arms interrupted the congregational prayer meeting and requested the minister leading the prayer meeting come and meet with them. They then served him with the interim interdict. The following day, messengers-at-arms called at the St George's Tron manse to serve the same writ because there had been a mistake made by the Court in the dating of the court order. This was reported in the national press and on BBC News. The displaced group moved to a nearby building at Bath Street in order to continue as an independent congregation, before affiliating with the Didasko Fellowship. The congregation subsequently planted an additional church, taking on a vacant former congregational church building in the Sandyford area which had latterly been in use as a base for the Royal Scottish National Orchestra as Henry Wood Hall. 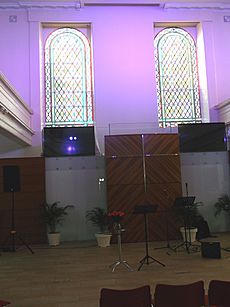 In 2015 Iain Campbell took up a temporary post as Artist-in-Residence at St George's. Campbell produced a painting titled "the last supper" depicting men in difficult personal circumstances dining at a table. This was to commemorate a cafe operated in the church which was a social enterprise project run in conjunction with Glasgow City Mission. In 2017, the Glasgow Street Pastors operated out of St George's Tron.

The building, which was commissioned by the City Fathers was designed by William Stark, was opened in 1808, originally as St. George's Parish Church.

From 2007-9 the church building was extensively refurbished by CRGP architects and surveyors, at a cost of £3m, the vast majority of it raised by the then congregation. This restored a number of original features which had been concealed by practical alterations over the years as well as revealing and addressing structural weaknesses in the tower which could have been catastrophic if left unaddressed. The new interior is much more open and of contemporary design.

All content from Kiddle encyclopedia articles (including the article images and facts) can be freely used under Attribution-ShareAlike license, unless stated otherwise. Cite this article:
St George's Tron Church Facts for Kids. Kiddle Encyclopedia.