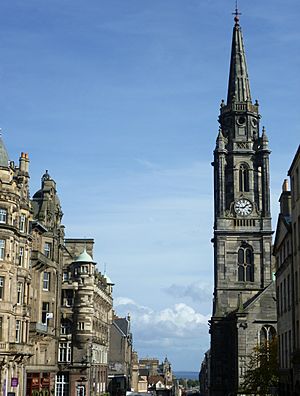 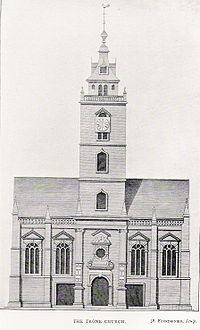 Engraving of the kirk as it looked before 1785 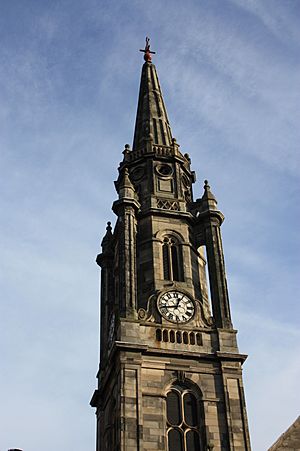 The stone spire of Tron Kirk by R & R Dickson 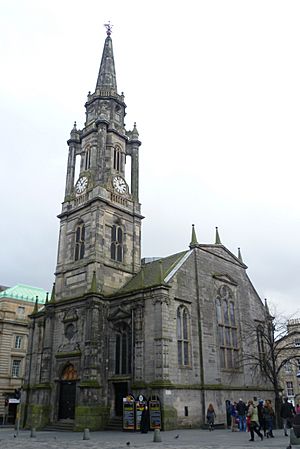 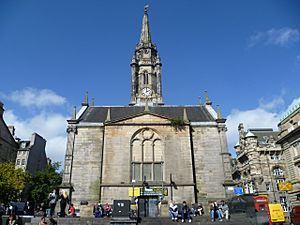 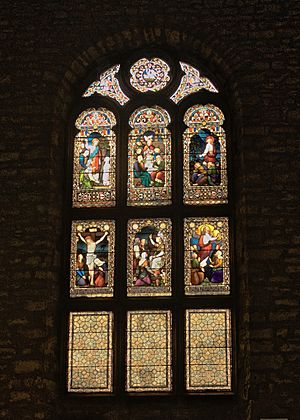 The Tron Kirk is a former principal parish church in Edinburgh, Scotland. It is a well-known landmark on the Royal Mile. It was built in the 17th century and closed as a church in 1952. Having stood empty for over fifty years, it was used briefly as a tourist information centre and, more recently, has been re-opened as the site of the Edinburgh World Heritage Exhibition and John Kay’s book and gift shop.

The church was dedicated to Christ by the citizens of Edinburgh in 1641, and known as "Christ's Kirk at the Tron". It was built for the North-West parish, one of the four parishes of Edinburgh after the Scottish Reformation of 1560. Prior to the erection of this new church, parishioners of the North-West parish worshipped in St. Giles' Cathedral. An English traveller, visiting the Tron in 1705, recorded his impression in his diary:—"The Nobility generally resort to the Tron Church, which is the principally (sic) and the Lord High Commissioner has a Throne erected in it, in a very spatious Gallery, on his right hand sits the Lord Chancellor, and on his left the Lord Provost of Edenborough." There were special grants of pews made by the Edinburgh Town Council to noblemen, Senators of the College of Justice, citizens of Edinburgh Old Town, Principals and Professors of the University. A full list of seat-holders has been preserved for 1650, the year of the battle of Dunbar, and for 1745, when Bonnie Prince Charlie was in Edinburgh.

Upon the entrance of the Prince to Edinburgh, he intimated that ministers should have full liberty to continue their duties on the following day—Sunday—the only requirement being that no names should be mentioned in the prayers for the royal family. The service at the Tron was taken by the Reverend Neil McVicar of St. Cuthbert's, the two Presbyterian ministers at the Tron having quietly left the city. The church was packed and he prayed as usual for King George by name and then added—"and as for this young man who has come among us seeking an earthly crown, we beseech Thee that he may obtain what is far better, a heavenly one!" When this was reported to Prince Charles, he is said to have laughed and expressed himself highly pleased at the courage and charity of the minister.

The memoirist Elisabeth West worshipped here when William Erskine was the minister and he died in May 1692. Erskine's replacement was George Meldrum and he advised her to keep a record and her diary is an insight into the Tron's history.

The baptisms and marriages of many Edinburgh luminaries took place in the Tron, one being the marriage of the famous jurist John Lauder, Lord Fountainhall on 21 January 1669, to Janet (1652–1686), daughter of Sir Andrew Ramsay, Lord Abbotshall, 1st Baronet, and the first Lord Provost of Edinburgh, and a Senator of the College of Justice (d.1688).

Rev John Drysdale, who married Mary Adam, daughter of the famous architect William Adam, was a Minister of the Tron Kirk from 1766 to 1788 and was also twice Moderator of the General Assembly of the Church of Scotland, though now he is chiefly remembered for his friendship with Adam Smith, the economist.

The General Assembly of the Church of Scotland met in the Tron from 1830 to 1840—the period of the "Ten Years' Conflict".

The Tron, as it is commonly called, was ordered to be built by King Charles I when he decided that St Giles' was to become the cathedral for the new see of Edinburgh. The land was purchased by the parish from Dr. William Scott, MD, for £1000 Scots. It was erected between 1636 and 1647 to a design by John Mylne, Royal master mason. The design mixed Palladian and Gothic elements and was inspired by contemporary Dutch architecture. The full Chamberlain's Accounts for this project are extant. The width of the building was reduced when both side aisles were removed in 1785 to accommodate the South Bridge and Blair Street leading to Hunter Square. In 1828 a new spire (designed by R & R Dickson) was constructed to replace the original, destroyed in the Great Edinburgh Fire of November 1824. The Tron closed as a church in 1952 and was acquired by the City of Edinburgh Council, the congregation moving to a new church in the Moredun area of the city.

The church was subsequently left to decay, and the interiors were eventually gutted. In 1974 archaeological excavations took place under the church which revealed foundations of 16th-century buildings from a long-vanished close, Marlins Wynd, named after a stonemason Walter Merlioun who lived there in 1500.

The Tron's position as the traditional focus of Edinburgh's Hogmanay celebrations has been greatly diminished in recent years, due to the expansion of the City Council's organised Hogmanay Street Party in the city centre.

However, it was announced in November 2012 that this historic venue would re-stake its claim to the city's hogmanay celebrations, with a Festival of the Extraordinary planned to include live music, film screenings and, amongst other things, a mixology masterclass.

The Tron is also used as a venue during the Edinburgh Festival Fringe, when it has been operated by Just The Tonic and Freestival as a music, comedy and cabaret venue and cafe.

Edinburgh World Heritage and John Kay's Shop at the Tron

A new exhibition which showcases the Old and New Towns of Edinburgh, as well as Scotland’s other five World Heritage Sites, is currently in place at the Tron Kirk.

The exhibition, housed within the atmospheric 17th century former Kirk, attempts to capture the essence of the World Heritage Site in Edinburgh through the voices and opinions of local people. The story is told in a series of videos, quotes, and specially commissioned portraits from award-winning Scottish photographer Alicia Bruce.

The site is also home to John Kay's Shop, a gift shop specialising in Scottish gifts and books, historic prints and maps.

All content from Kiddle encyclopedia articles (including the article images and facts) can be freely used under Attribution-ShareAlike license, unless stated otherwise. Cite this article:
Tron Kirk Facts for Kids. Kiddle Encyclopedia.