The SEC Armadillo (originally known as the Clyde Auditorium) is an auditorium located near the River Clyde, in Glasgow, Scotland. It is one of three venues on the Scottish Event Campus, which includes the SEC Centre and the SSE Hydro. 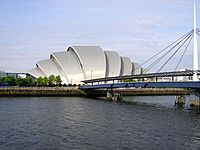 The auditorium viewed from across the Clyde, also showing the Bell's Bridge linking the area to Pacific Quay

Plans for a new building to increase the capacity of the SECC complex were initiated in 1994. Designed by architects Foster and Partners, construction of the 3,000 seat venue started in September 1995, and was completed in August 2000, by which time it had earned its affectionate nickname, due to the similarity of its shape to that of the animal of the same name.

Many comparisons have been made with the Sydney Opera House, although this was not the architects' inspiration for the design, which was in fact an interlocking series of ship's hulls, in reference to the Clyde's shipbuilding heritage.

The building has become one of the most recognisable on Clydeside and an iconic image of Glasgow. It is connected by passageways to the SEC Centre, and the Crowne Plaza hotel for easy access and exit for performers.

The building has held events, such as the Scottish auditions of Britain's Got Talent 2008 to 2010, the auditions for the first four editions of The X Factor and the Hugo Award ceremony during Interaction, the 63rd World Science Fiction Convention. Singer Susan Boyle was discovered at this venue.

The building served as the venue for the weightlifting competitions of the 2014 Commonwealth Games, held in Glasgow. In the season of Christmas, the Armadillo is used for pantomimes. Westlife lead vocalist Shane Filan played at the venue twice as a solo artist in 2016 and 2017.

All content from Kiddle encyclopedia articles (including the article images and facts) can be freely used under Attribution-ShareAlike license, unless stated otherwise. Cite this article:
SEC Armadillo Facts for Kids. Kiddle Encyclopedia.