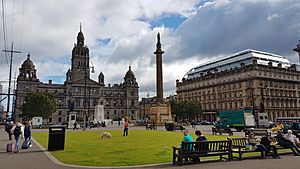 George Square with the Scott monument in the centre, Glasgow City Chambers to the left and the former Post Office to the right.

George Square is the principal civic square in the city of Glasgow, Scotland. It is one of six squares in the city centre, the others being Cathedral Square, St Andrew's Square, St Enoch Square, Royal Exchange Square, and Blythswood Square on Blythswood Hill.

Named after King George III and initially laid out in 1781 but not developed for another twenty years, George Square is surrounded by architecturally important buildings including on the east side the palatial Municipal Chambers, also known as the City Chambers, whose foundation stone was laid in 1883, and on the west side by the Merchants' House. Built by Glasgow Corporation, the Chambers are the continuing headquarters of Glasgow City Council. Joseph Swan's panoramic engraving of 1829 shows the early development of the square and its surrounding buildings.

The square boasts an important collection of statues and monuments, including those dedicated to Robert Burns, James Watt, Sir Robert Peel and Sir Walter Scott.

George Square was laid out in 1781, part of the innovative Georgian central grid plan of the city`s New Town that initially spanned from Stockwell Street west to Buchanan Street—which reflected the growing rational influence of the Scottish Enlightenment, along with the similar development of Edinburgh's New Town. This grid iron masterplan across the lands of Meadowflats, and eventually as far west as Blythswood Hill, was largely the work of the notable contemporary architects David Hamilton. James Barry, James Craig, James Gillespie Graham among others.

For the first few years however it was little more than a muddy hollow, filled with dirty water and used for slaughtering horses. Between 1787 and the 1820s, the square was eventually opened up and lined with Georgian townhouses at its east and west ends, as well as hotels. 1842 saw the opening, at the north west corner of the square, of Queen Street Station as the Glasgow terminus of the Edinburgh and Glasgow Railway. By 1850 the surrounding area had become a centre for mercantile activity, with the Merchants House moving to the square in 1877, and the square itself, which had been developed into a private garden for the surrounding townhouses, became an established public space, after frequent disturbances and pulling down of railings by a disgruntled mob.

The square was named after King George III, a statue of whom was originally intended to occupy the centre of the square, but the turmoil and anxiety caused to the city's Tobacco Lords by the War of American Independence in 1775 and eventual British defeat in 1783, coupled with his ever more frequent bouts of madness had created mixed feelings toward the Hanoverian and so it was decided instead to commemorate Sir Walter Scott, which, incidentally, was the first ever memorial dedicated to him. The 80 foot Doric column is by Alexander Handyside Ritchie, "an architectural sculptor of genius", and the sculpture of Scott above it was by John Greenshields. Both were completed between 1834–37, some years before Scott was commemorated in Edinburgh. 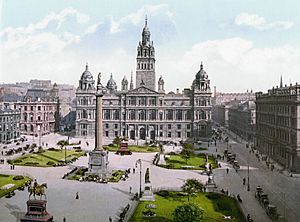 Today the east side of the square is dominated by the ornate Glasgow City Chambers, designed by architect William Young, which was opened in 1888. On the South side are a number of buildings, including the former General Post Office, built in 1878 and redeveloped into offices in 2007, a Chicago-style office building, dating from 1924. The city's main Tourist Information Centre is in the adjacent Royal Exchange Square.

The North side consists of Queen Street Station, the North British Railway Hotel (now the Millennium Hotel), which date from the 1840s, and George House, which replaced an older Georgian building, built in 1979 to provide extra office space for Glasgow City Council, and later the offices of Ernst & Young.

Queen Street, running parallel to the square's West side, was formerly a row of hotels and now features the Merchants House building for the guildry formed in 1603 to establish the rights, duties and privileges of the merchants and craftsmen of Glasgow. Westbourne Music perform regularly here in a series of Merchants Music. The building also houses the Glasgow Chamber of Commerce, founded in 1783. Designed by John Burnet and opened in 1874, two storeys were added to the Merchants House by his son JJ Burnet in 1907 and are topped by a domed tower on which is perched the emblem of the House a ship on a globe, a reminder of the importance of sea trade to Glasgow's prosperity. The western side is also the location of the former Bank of Scotland building, which is now offices and a restaurant and bar.

The square has often been the scene of public meetings, political gatherings, protests, celebrations, ceremonies, parades and concerts. Perhaps the most famous was the 1919 Black Friday rally, when campaigners for improved working conditions (particularly protesting a 56-hour working week in many of the city's factories) held an enormous rally, with at least 90,000 protesters filling the square and the surrounding streets. The meeting descended into violence between the protesters and the police, with the riot act being read. The city's radical reputation, and the raising of the red flag by some present, made the Liberal government fear a Bolshevik revolution was afoot. The government responded by deploying fully armed troops and tanks into the square and the city's streets.

The square later provided a home to political hustings and meetings of all sorts, protests against the Poll tax and Iraq War, annual Remembrance Day parades and has lately become the venue for the city's extensive Hogmanay celebrations. The Square is also used for musical events and pageants.

In February 2005, the square was closed to pedestrians for a two-month restoration project, including the replacement of the red asphalt concourse, and the cleaning of stone and the statues in the square, most notably that of Walter Scott.

Plans to remove the greenspace and lease the area for temporary businesses and events has been controversial. In 2012 a campaign was started to restore the square to its previous state.

In 2012 Glasgow City Council voted to spend £15m on a "makeover", of the square, in preparation for the 2014 Commonwealth Games, to make it "a place fit for the 21st Century". The plans included removing all of the monuments and statues in the square, ostensibly for restoration. However, the council said that "it is possible" that the monuments "may not return to the square", but will rather be relocated to "an area of regeneration". Only one monument was certain to remain; the Cenotaph by Sir John James Burnet.

On 9 January 2013, the six shortlisted designs were put on display to the public in a nearby gallery. All the designs featured at least half the statues returning, with many containing all 11. Each short-listed design also contained a water-feature, which public reaction has been highly critical of considering the typical weather Glasgow experiences. The competition proved highly controversial with the redevelopment plan abandonment in the face of public outrage being reported on the same day as the winner - John McAslan & Partners - was announced.

All content from Kiddle encyclopedia articles (including the article images and facts) can be freely used under Attribution-ShareAlike license, unless stated otherwise. Cite this article:
George Square Facts for Kids. Kiddle Encyclopedia.