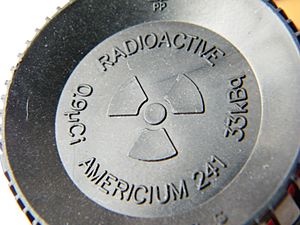 Americium-241 container in a smoke detector. 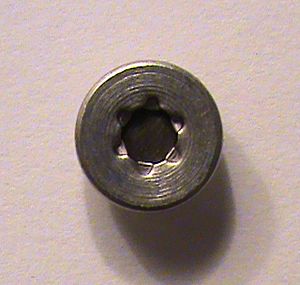 Americium-241 capsule as found in smoke detector. The circle of darker metal in the center is americium-241; the surrounding casing is aluminium.

Radionuclides are present in many homes as they are used inside the most common household smoke detectors. The radionuclide used is americium-241, which is created by bombarding plutonium with neutrons in a nuclear reactor. It decays by emitting alpha particles and gamma radiation to become neptunium-237. Smoke detectors use a very small quantity of 241Am (about 0.29 micrograms per smoke detector) in the form of americium dioxide. 241Am is used as it emits alpha particles which ionise the air in the detector's ionization chamber. A small electric voltage is applied to the ionised air which gives rise to a small electric current. In the presence of smoke some of the ions are neutralized, thereby decreasing the current, which activates the detector's alarm.

All content from Kiddle encyclopedia articles (including the article images and facts) can be freely used under Attribution-ShareAlike license, unless stated otherwise. Cite this article:
Radionuclide Facts for Kids. Kiddle Encyclopedia.