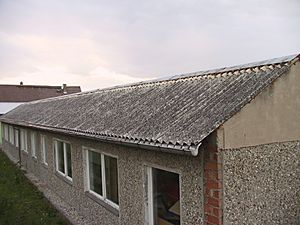 Asbestos is a carcinogen. The roof of this house is made of asbestos. 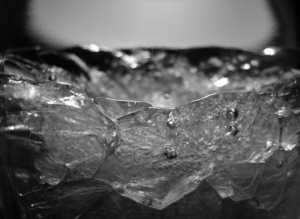 Frozen benzene. Benzene is a carcinogen 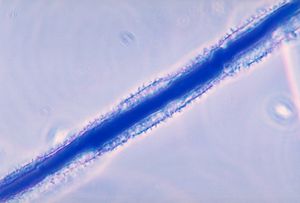 Aspergillus flavus, a kind of mould, produces Aflatoxin B1, which is a carcinogen.

Carcinogens are substances that cause cancer. Sometimes radiation or radionuclide are also considered carcinogens. A common example of a carcinogen is tobacco smoke. Carcinogens come from both natural and man-made substances.

Several radioactive substances are considered carcinogens. The carcinogens in them are caused by the radiation they release, such as gamma rays or alpha particles.

Thorotrast, previously used in x-rays, is a human carcinogen. Marie Curie, one of the pioneers of radioactivity, died of a cancer that was caused by the radiation she was exposed to during her experiments.

Not all types of electromagnetic radiation are carcinogenic. Radio waves, microwave radiation, infrared radiation, and visible light are examples of this. Higher-energy radiation, including ultraviolet radiation, usually is carcinogenic, if a person is exposed to it long enough.

Recent research has shown that when food is cooked at high temperatures, carcinogens may be formed in very small amounts. Pre-cooking meats in a microwave oven for 2-3 minutes before broiling shortens the time on the hot pan. This could help stop the carcinogens from being made. Certain kinds of foods, like potato chips and French fries, may have higher levels of carcinogens than others. The charred residue on barbecued meats is a carcinogen, too.

This does not mean eating cooked foods is dangerous. The gastrointestinal tract sheds its outer layer continuously to protect itself from carcinomas. Because of this, it has a good chance of shedding bad enzymes that could cause cancer.

All content from Kiddle encyclopedia articles (including the article images and facts) can be freely used under Attribution-ShareAlike license, unless stated otherwise. Cite this article:
Carcinogen Facts for Kids. Kiddle Encyclopedia.