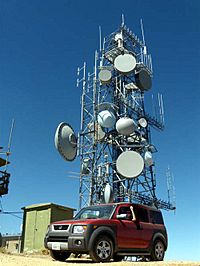 A telecommunications tower with a variety of dish antennas for microwave relay links on Frazier Peak, Ventura County, California.

A microwave is a kind of high-frequency radio wave. It is often used to heat food in a microwave oven. 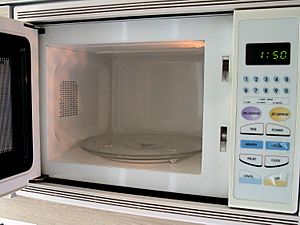 Heat is just the movement of molecules, so when the microwave oven tells the molecules to turn left, then right, then left, over and over again, this makes them get hotter.

Metals tend to spark in microwaves, rather than heating. The reason why is that metals like to give away electrons, so when the microwaves "push" at their magnet-like electrons, instead of turning, they just give the electrons away. A bunch of electrons running off on metal is called electricity, and we see it in the form of sparks.

All content from Kiddle encyclopedia articles (including the article images and facts) can be freely used under Attribution-ShareAlike license, unless stated otherwise. Cite this article:
Microwave Facts for Kids. Kiddle Encyclopedia.