Mount Antero is the highest summit of the southern Sawatch Range of the Rocky Mountains of North America. The prominent 14,276-foot (4351.4 m) fourteener is located in San Isabel National Forest, 12.2 miles (19.6 km) southwest by south (bearing 208°) of the Town of Buena Vista in Chaffee County, Colorado, United States. The mountain is named in honor of Chief Antero of the Uintah band of the Ute people.

Mount Antero is prized for its gemstone deposits and has one of the highest concentrations of aquamarine in the country. There are several active private mining claims being exploited on Mount Antero and surrounding peaks.

The peak is located due south of the more visually prominent Mount Princeton. Mount Antero is one of the most prominent peaks of the Sawatch Range, rising an impressive 7,200 feet above the town of Salida, Colorado to the southeast. There are two popular climbing routes on Mount Antero. The generally accepted hiking route is from the east starting at the Browns Creek Trailhead and paralleling Little Browns Creek to its upper reaches where it crosses Forest Road 1A, then following the road near to the summit. The other route, which begins near the ghost town of St. Elmo, follows the same forest road from the north up Baldwin Creek. This route has heavy mining and tourist traffic in fair weather during the summer months.

The peak was surveyed by the Pike Expedition in 1806. A forest service sign at the Browns Creek trailhead commemorates the expedition camp at the eastern base of the peak. 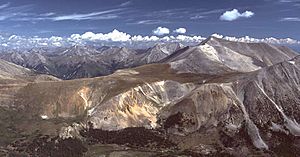 Mt. Antero (at center-right), looking north from the summit of Mt. Shavano

All content from Kiddle encyclopedia articles (including the article images and facts) can be freely used under Attribution-ShareAlike license, unless stated otherwise. Cite this article:
Mount Antero Facts for Kids. Kiddle Encyclopedia.