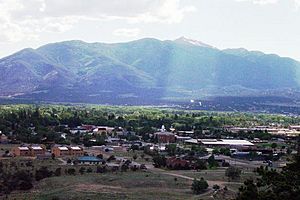 Buena Vista at the foot of the Collegiate Peaks 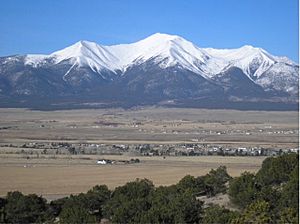 The Town of Buena Vista is a Statutory Town in Chaffee County, Colorado, United States. The town population was 2,617 at the 2010 United States Census.

The Arkansas River Valley and the area of what would become Buena Vista was first settled in 1864 by settlers drawn to the area by the plentiful water which made the land suitable for agriculture. By 1880, the county seat had moved from Granite to Buena Vista, but by 1928 Salida had a larger population so the county seat was moved once again. By 1894, Buena Vista had electricity, telephone service, street lights, parks, cemeteries, and schools. Travelers, speculators, and miners traveling up the Arkansas Valley towards Leadville made Buena Vista a popular stagecoach stop, and railroad depot following the 1890s. While certainly experiencing economic ups and downs, the valley's agricultural economy has made the area more resistant to the 'boom, bust' cycle of mining towns.

Buena Vista is located in central Colorado roughly midway between Salida and Leadville in the Upper Arkansas River Valley at an elevation of 7,965 feet (2,428 m). The area between Buena Vista and Salida is often referred to as the Denver & Rio Grande, South Park & Pacific, and Colorado Midland railroads. Many of the existing buildings of Buena Vista date back to this era, and were built in the 1880s and 1890s.

The name "Buena Vista", Spanish for "Beautiful View", can often be heard pronounced locally as "Biewna Vista". This Americanized pronunciation was specified by Alsina Dearheimer, who chose this name for the town, which was officially selected over other names (Cottonwood, Mahonville) on the occasion of the town's incorporation. Alternate pronunciations include "Bwena Veesta" (Spanish pronunciation) and simply "Biewnie." Many residents simply refer to the town as "BV". 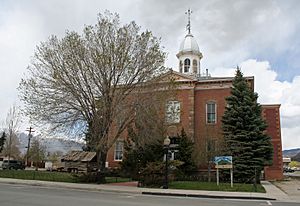 There were 978 households out of which 27.1% had children under the age of 18 living with them, 54.2% were married couples living together, 7.7% had a female householder with no husband present, and 36.3% were non-families. 31.0% of all households were made up of individuals and 12.8% had someone living alone who was 65 years of age or older. The average household size was 2.24 and the average family size was 2.83.

U.S. Route 24 is an east-west highway running from Clarkston, Michigan, to its intersection with Interstate 70 near Minturn, Colorado. Its western terminus is located just 64 miles (103 km) north of Buena Vista.

The short segment between US 50 at Poncha Springs and US 24 at Buena Vista was originally U.S. Route 650, designated in 1926. US 285 was commissioned in 1936 along its present extent from Sanderson, Texas, to Denver, mostly replacing state-numbered highways.

Chaffee County Road 306 leaves Buena Vista and travels west to the summit of Cottonwood Pass (elevation 12,126 feet / 3,696 meters). This road is closed during the snowy months, typically late October to April or May, but when open allows travelers a more direct route to Gunnison and Crested Butte than US 50 crossing Monarch Pass to the south of town.

All content from Kiddle encyclopedia articles (including the article images and facts) can be freely used under Attribution-ShareAlike license, unless stated otherwise. Cite this article:
Buena Vista, Colorado Facts for Kids. Kiddle Encyclopedia.