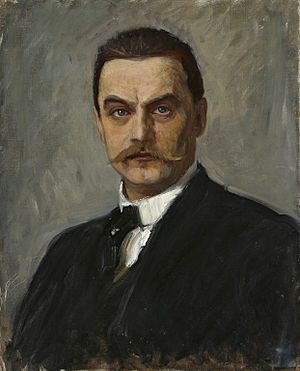 Albert Gustaf Aristides Edelfelt (21 July 1854 – 18 August 1905) was a Finnish painter. He painted a lot of history subjects and portraits.

Edelfelt studied and exhibited in Paris. He was invited to paint portraits of many famous people abroad. This way culture of Finland became famous many years before the country became independent.

Edelfelt was above all a painter, but he also worked as a graphic artist and illustrator. His famous works include the illustrations for Johan Ludvig Runeberg's partiotic collection of poems, the 'Ensign Stål' stories (1894 - 1900).

All content from Kiddle encyclopedia articles (including the article images and facts) can be freely used under Attribution-ShareAlike license, unless stated otherwise. Cite this article:
Albert Edelfelt Facts for Kids. Kiddle Encyclopedia.