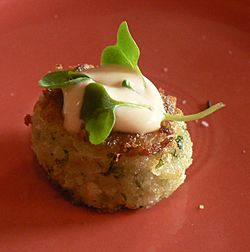 A crab cake is an American dish comprised of a crab meat patty and various other ingredients such as breadcrumbs, milk, eggs, onions, and seasonings. Occasionally other ingredients such as red or green peppers are added, at which point the cake is then sautéed, baked, or grilled, and then served. Crab cakes are traditionally associated with the area surrounding the Chesapeake Bay, in particular the state of Maryland.

The two most common styles of Maryland crab cakes are known as Boardwalk, and Restaurant. Boardwalk crabcakes are typically deep fried and breaded, and are often filled with stuffing of various sorts and served on a hamburger bun. Restaurant crab cakes, which are sometimes called gourmet crab cakes, are served with no filler, and are composed of all-lump crab meat served on a platter or open faced sandwich. Many restaurants that offer Maryland Crab Cakes will offer to have the cakes fried or broiled. Broiled crab cakes are lower in fat and healthier to eat.

Meat from any species of crab may be used, although the meat of the blue crab, whose native habitat includes the Chesapeake Bay, is traditional.

Crab cakes are popular along the coast of the Mid-Atlantic States where the crabbing industry thrives. Crab cakes vary in size from no bigger than a small cookie to as large as a hamburger. They are usually served with some sort of sauce, usually a remoulade or tartar sauce, and sometimes ketchup.

In the Pacific Northwest, the endemic Dungeness Crab is a popular ingredient for crab cakes, and the cakes are prepared at many well-established restaurants throughout the region. Dungeness crab flesh has a delicate flavor which is considered sweeter than the flesh of other crabs.

All content from Kiddle encyclopedia articles (including the article images and facts) can be freely used under Attribution-ShareAlike license, unless stated otherwise. Cite this article:
Crab cakes Facts for Kids. Kiddle Encyclopedia.