Brunswick stew is a tomato-based stew generally involving local beans, vegetables, and originally small game meat such as squirrel or rabbit, though today often chicken. The exact origin of the stew is disputed. The states of Virginia, North Carolina, and Georgia all claim its birth, with Brunswick County in Virginia and the city of Brunswick in Georgia both claiming it was developed there. It may have originated earlier in some form in the city of Braunschweig (English: Brunswick) in the Duchy of Brunswick-Lüneburg in today's northern Germany.

Recipes for Brunswick stew vary greatly, but it is usually a tomato-based stew, containing various types of lima beans (butter beans), corn, okra, and other vegetables, and one or more types of meat. Originally it was small game such as squirrel, rabbit or possum meat, but chicken is most common today. Eastern North Carolina Brunswick Stew has potatoes, which thicken it considerably. Eastern Virginia Brunswick Stew tends to be thinner, with more tomato flavor.

Today chicken and rabbit are more common in Virginia, pork in Georgia, and only in recent years Eastern North Carolina–style pulled pork barbecue may be found there. Many Piedmont-Triad barbecue restaurants include Lexington-style barbecue in the dish. 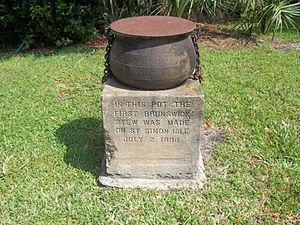 The original Brunswick Stewpot in front of the Farmers Market pavilion in Brunswick, Georgia

The stew's specific origin is unknown. Brunswick County, Virginia, and the city of Brunswick, Georgia, both named after the German Duchy of Brunswick-Lüneburg, then home to the House of Hanover which ruled the British throne, claim to have created it.

A plaque on an old iron pot in Brunswick, Georgia, says the first Brunswick stew was made in it on July 2, 1898, on nearby St. Simons Island. A competing story claims a Virginia state legislator's chef invented the recipe in 1828 on a hunting expedition. Neither claim traces to the origin of those regions.

Marjorie Kinnan Rawlings, in her Cross Creek Cookery (1942), wrote that the stew, said to have been one of Queen Victoria's favorites, may have come from Braunschweig, Germany, one of the historic capitals of the Duchy of Brunswick-Lüneburg and traditionally known as "Brunswick" in British English.

All content from Kiddle encyclopedia articles (including the article images and facts) can be freely used under Attribution-ShareAlike license, unless stated otherwise. Cite this article:
Brunswick stew Facts for Kids. Kiddle Encyclopedia.