Biscuits and gravy facts for kids 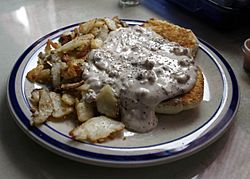 A serving of biscuits and gravy, accompanied by home fries

Biscuits and gravy is a popular breakfast dish in the United States, especially in the South. The dish consists of soft dough biscuits covered in either sawmill or meat gravy, made from the drippings of cooked pork sausage, white flour, milk, and often (but not always) bits of sausage, bacon, ground beef, or other meat. The gravy is often flavored with black pepper.

The meal emerged as a distinct regional dish after the American Revolutionary War (1775–1783), when stocks of foodstuffs were in short supply. Breakfast was necessarily the most substantial meal of the day in the South, for a person facing a day of work on the plantations. In addition, the lack of supplies and money meant it had to be cheap.

Restaurant chains specializing in biscuits and gravy are found in Virginia, Tennessee, North Carolina, which has Biscuitville, and West Virginia, which has Tudor's Biscuit World.

All content from Kiddle encyclopedia articles (including the article images and facts) can be freely used under Attribution-ShareAlike license, unless stated otherwise. Cite this article:
Biscuits and gravy Facts for Kids. Kiddle Encyclopedia.