Medieval Latin was the form of Latin used in the Middle Ages. It was mostly used by scholars and as the liturgical language of the medieval Roman Catholic Church, but also as a language of science, literature, and administration.

Despite the clerical origin of many of its authors, Medieval Latin should not be confused with Ecclesiastical Latin. There is no real consensus on the exact boundary where Late Latin ends and Medieval Latin begins. Some scholars have their surveys of it begin with the rise of early Christian Latin in the middle of the 4th century, others around the year 500. 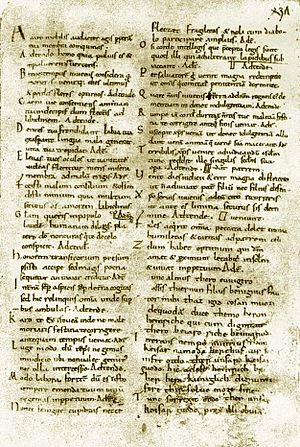 All content from Kiddle encyclopedia articles (including the article images and facts) can be freely used under Attribution-ShareAlike license, unless stated otherwise. Cite this article:
Medieval Latin Facts for Kids. Kiddle Encyclopedia.