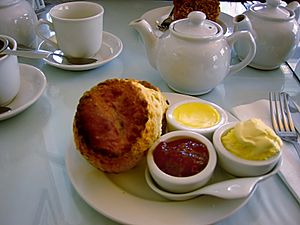 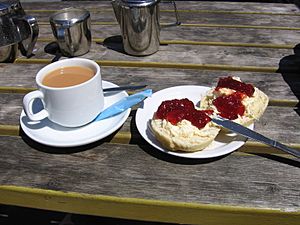 Cream tea in Boscastle, Cornwall, prepared according to the "Devon method".

A cream tea (also known as a Devon cream tea, Devonshire tea, or Cornish cream tea) is a form of afternoon tea, consisting of tea served with a combination of scones, clotted cream (or, less authentically, whipped cream), jam, and sometimes butter. Though a particular speciality of Devon and Cornwall, cream teas are sold in tea rooms throughout England, and in some other parts of the Commonwealth.

The exact origin of "cream tea" is disputed, although there is evidence to suggest that the tradition of eating bread with cream and jam already existed at Tavistock Abbey in Devon in the 11th century. The earliest use of "cream tea" in the sense of the afternoon tea, as opposed to a cup of tea with cream in it, that the Oxford English Dictionary reports, is in the 1964 novel Picture of Millie by Philip Maitland Hubbard, "We just bathe and moon about and eat cream teas." However, the "Foods of England" website has discovered a much earlier newspaper cutting, 'The Cornishman' of Thursday, 3 September 1931 (p. 8), which uses the phrase in what appears to be its modern sense.

There are regional variations as to how a cream tea should preferably be eaten.

Although these distinctions on whether to apply the jam or the clotted cream to the scone first are still claimed by many, cream teas are served and enjoyed both cream first and jam first throughout both counties.

Scones are rarely buttered in commercially available teas. Traditionally it is important that the scones be warm (ideally, freshly baked), and that clotted (rather than whipped) cream and strawberry jam, rather than any other variety, be used. Butter is generally not included, and some sources advise that the tea should not be served with milk.

In Devon, an alternative to the scone found occasionally is the "Devon split" or "Chudleigh", lighter than a scone and smaller than a Cornish split. In Cornwall an alternative was traditionally a "Cornish split", a type of slightly sweet white bread roll, rather than a scone. It is now rare to find this available commercially, even in Cornwall, but splits are still used by many Cornish families in their own homes.

Another variation to a cream tea is called "Thunder and Lightning", which consists of a round of bread or a Cornish split, topped with clotted cream and honey or golden syrup.

All content from Kiddle encyclopedia articles (including the article images and facts) can be freely used under Attribution-ShareAlike license, unless stated otherwise. Cite this article:
Cream tea Facts for Kids. Kiddle Encyclopedia.