Potassium bitartrate, also known as potassium hydrogen tartrate, with formula KC4H5O6, is a byproduct of winemaking. In cooking it is known as cream of tartar. It is processed from the potassium acid salt of tartaric acid (a carboxylic acid). The resulting powdery acid can be used in baking or as a cleaning solution (when mixed with an acidic solution such as lemon juice or white vinegar). 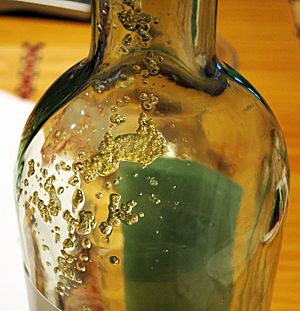 Potassium bitartrate crystallizes in wine casks during the fermentation of grape juice, and can precipitate out of wine in bottles. The crystals (wine diamonds) will often form on the underside of a cork in wine-filled bottles that have been stored at temperatures below 10 °C (50 °F), and will seldom, if ever, dissolve naturally into the wine.

These crystals also precipitate out of fresh grape juice that has been chilled or allowed to stand for some time. To prevent crystals forming in homemade grape jam or jelly, the prerequisite fresh grape juice should be chilled overnight to promote crystallization. The potassium bitartrate crystals are removed by filtering through two layers of cheesecloth. The filtered juice may then be made into jam or jelly. In some cases they adhere to the side of the chilled container, making filtering unnecessary.

The crude form (known as beeswing) is collected and purified to produce the white, odorless, acidic powder used for many culinary and other household purposes. 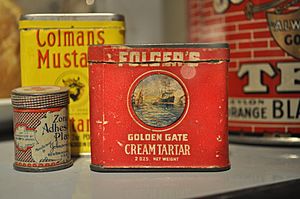 In food, potassium bitartrate is used for:

Additionally it is used as a component of:

A similar acid salt, sodium acid pyrophosphate, can be confused with cream of tartar because of their common function as a component of baking powder.

Potassium bitartrate can be mixed with an acidic liquid such as lemon juice or white vinegar to make a paste-like cleaning agent for metals such as brass, aluminium or copper, or with water for other cleaning applications such as removing light stains from porcelain. This mixture is sometimes mistakenly made with vinegar and sodium bicarbonate (baking soda), which actually react to neutralize each other, creating carbon dioxide and a sodium acetate solution.

Cream of tartar was often used in traditional dyeing where the complexing action of the tartrate ions was used to adjust the solubility and hydrolysis of mordant salts such as tin chloride and alum.

Cream of tartar, when mixed into a paste with hydrogen peroxide, can be used to clean rust from some hand tools, notably hand files. The paste is applied and allowed to set for a few hours and then washed off with a baking soda/water solution. After another rinse with water and thorough drying, a thin application of oil will protect the file from further rusting.

Slowing the set time of plaster of Paris products (most widely used in gypsum plaster wall work and artwork casting) is typically achieved by the simple introduction of almost any acid diluted into the mixing water. A commercial retardant premix additive sold by USG to trade interior plasterers includes at least 40% potassium bitartrate. The remaining ingredients are the same plaster of Paris and quartz-silica aggregate already prominent in the main product. This means that the only active ingredient is the cream of tartar.

For dyeing hair, potassium bitartrate can be mixed with henna as the mild acid needed to activate the henna.

Cream of tartar has been used internally as a purgative, but this is dangerous because an excess of potassium, or hyperkalemia, may occur.

Potassium bitartrate is the National Institute of Standards and Technology's primary reference standard for a pH buffer. Using an excess of the salt in water, a saturated solution is created with a pH of 3.557 at 25 °C (77 °F). Upon dissolution in acid, potassium bitartrate will dissociate into acid tartrate, tartrate, and potassium ions. Thus, a saturated solution creates a buffer with standard pH. Before use as a standard, it is recommended that the solution be filtered or decanted between 22 °C (72 °F) and 28 °C (82 °F). Potassium carbonate can be made by burning cream of tartar, which produces "pearl ash". This process is now obsolete but produced a higher quality (reasonable purity) than "potash" extracted from wood or other plant ashes.

All content from Kiddle encyclopedia articles (including the article images and facts) can be freely used under Attribution-ShareAlike license, unless stated otherwise. Cite this article:
Potassium bitartrate Facts for Kids. Kiddle Encyclopedia.