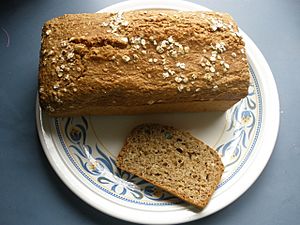 The soda bread is a kind of soft, golden bread made with baking soda. In its most basic form it contains only four ingredients; flour, salt, baking soda, and buttermilk. Yet it can be changed when you add other ingredients. For instance, if you add a little sugar, some raisins, then cut in some butter, it may become a Raisin soda bread.

Soda bread does not use yeast to get its rise, instead the rise comes from baking soda reacting with the acid (soured milk or buttermilk). This makes it a 'quick' bread that can be made in under 15 minutes. The important thing to remember is to have mix and knead the dough quickly and lightly. This will give you a bread that is dense, but not doughy, with a tender, slightly moist interior. Once the dough is formed into a round, a cross is cut on the top of the bread, which divides it into quarters called farls.

All content from Kiddle encyclopedia articles (including the article images and facts) can be freely used under Attribution-ShareAlike license, unless stated otherwise. Cite this article:
Soda bread Facts for Kids. Kiddle Encyclopedia.