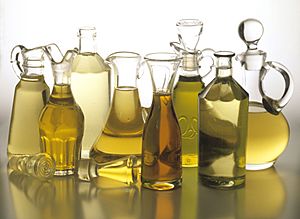 Many types of Oils

Cooking oil is plant, animal, or synthetic fat used in frying, baking, and other types of cooking. It is also used in food preparation and flavouring not involving heat, such as salad dressings and bread dips, and in this sense might be more accurately termed edible oil.

Cooking oil is typically a liquid at room temperature, although some oils that contain saturated fat, such as coconut oil, palm oil and palm kernel oil are solid.

There are a wide variety of cooking oils from plant sources such as olive oil, palm oil, soybean oil, canola oil (rapeseed oil), corn oil, peanut oil and other vegetable oils, as well as animal-based oils like butter and lard.

Oil can be flavoured with aromatic foodstuffs such as herbs, chillies or garlic.

Peanut oil, cashew oil and other nut-based oils may present a hazard to persons with a nut allergy.

Unlike other dietary fats, trans fats are not essential, and they do not promote good health. The consumption of trans fats increases one's risk of coronary heart disease by raising levels of "bad" LDL cholesterol and lowering levels of "good" HDL cholesterol. Trans fats from partially hydrogenated oils are more harmful than naturally occurring oils.

Several large studies indicate a link between the consumption of high amounts of trans fat and coronary heart disease, and possibly some other diseases. The United States Food and Drug Administration (FDA), the National Heart, Lung and Blood Institute and the American Heart Association (AHA) all have recommended limiting the intake of trans fats.

Heating an oil changes its characteristics. Oils that are healthy at room temperature can become unhealthy when heated above certain temperatures, so when choosing a cooking oil, it is important to match the oil's heat tolerance with the temperature which will be used. Deep-fat frying temperatures are commonly in the range of 170–190 °C (338–374 °F), less commonly, lower temperatures ≥ 130 °C (266 °F) are used.

Palm oil contains more saturated fats than canola oil, corn oil, linseed oil, soybean oil, safflower oil, and sunflower oil. Therefore, palm oil can withstand deep frying at higher temperatures and is resistant to oxidation compared to high-polyunsaturated vegetable oils. Since about 1900, palm oil has been increasingly incorporated into food by the global commercial food industry because it remains stable in deep frying, or in baking at very high temperatures, and for its high levels of natural antioxidants.

The following oils are suitable for high-temperature frying due to their high smoke point above 230 °C (446 °F):

All oils degrade in response to heat, light, and oxygen. To delay the onset of rancidity, a blanket of an inert gas, usually nitrogen, is applied to the vapor space in the storage container immediately after production – a process called tank blanketing.

In a cool, dry place, oils have greater stability, but may thicken, although they will soon return to liquid form if they are left at room temperature. To minimize the degrading effects of heat and light, oils should be removed from cold storage just long enough for use.

By contrast, oils high in saturated fats, such as avocado oil, have relatively long shelf lives and can be safely stored at room temperature, as the low polyunsaturated fat content facilitates stability.

The smoke point is marked by "a continuous wisp of smoke." It is the the temperature at which an oil starts to burn, leading to a burnt flavor in the foods being prepared and degradation of nutrients and phytochemicals characteristic of the oil. Above the smoke point are flash and fire points. The flash point is when the oil vapors will ignite but aren't produced in sufficient quantities to stay lit. The flash point generally occurs at about 275–330 °C (527–626 °F). The fire point is the temperature at which hot oil produces sufficient vapors it will catch on fire and burn. As frying hours increase, all these temperature points decrease. They depend more on an oil's acidity than fatty-acid profile.

The smoke point of cooking oils varies generally in association with how an oil is refined: a higher smoke point results from removal of impurities and free fatty acids. They also depend on any residual solvent remaining from the refining process. They have been reported to increase with the inclusion of antioxidants (BHT, BHA, and TBHQ). For these reasons, the published smoke points of oils may vary.

Oils are extracted from nuts, seeds, olives, grains or legumes by extraction using industrial chemicals or by mechanical processes. Expeller pressing is a chemical-free process that collects oils from a source using a mechanical press with minimal heat. Cold-pressed oils are extracted under a controlled temperature setting usually below 105 °C (221 °F) intended to preserve naturally occurring phytochemicals, such as polyphenols, plant sterols and vitamin E which collectively affect color, flavor, aroma and nutrient value.

Comparison to other types of food 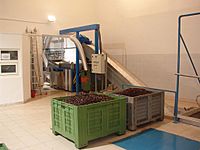 Cooking oil extraction and refinement are separate processes. Extraction first removes the oil, typically from a seed, nut or fruit. Refinement then alters the appearance, texture, taste, smell, or stability of the oil to meet buyer expectations.

There are three broad types of oil extraction:

In large-scale industrial oil extraction you will often see some combination of pressing, chemical extraction and/or centrifuging in order to extract the maximum amount of oil possible.

Cooking oil can either be unrefined, or refined using one or more of the following refinement processes (in any combination):

Filtering, a non-chemical process which screens out larger particles, could be considered a step in refinement, although it doesn't alter the state of the oil.

Most large-scale commercial cooking oil refinement will involve all of these steps in order to achieve a product that's uniform in taste, smell and appearance, and has a longer shelf life. Cooking oil intended for the health food market will often be unrefined, which can result in a less stable product but minimizes exposure to high temperatures and chemical processing.

A bin for spent cooking oil in Austin, Texas, USA, managed by a recycling company.

Because of this, cooking oil should never be dumped in the kitchen sink or in the toilet bowl. The proper way to dispose of oil is to put it in a sealed non-recyclable container and discard it with regular garbage. Placing the container of oil in the refrigerator to harden also makes disposal easier and less messy.

Cooking oil can be recycled. It can be used as animal feed, directly as fuel, and to produce biodiesel, soap, and other industrial products.

Used cooking oil, besides being converted to biodiesel, can be used directly in modified diesel engines and for heating.

Grease traps or interceptors collect fats and oils from kitchen sinks and floor drains which would othewise clog sewer lines and interfere with septic systems and sewage treatment. The collected product is called brown grease in the recycling industry. Brown grease is contaminated with rotted food solids and considered unsuitable for re-use in most applications.

Gutter oil and trench oil are terms used in China to describe recycled oil processed to resemble virgin oil, but containing toxic contaminants and sold illegally for cooking; its origin is frequently brown grease from garbage.

In Kenya, thieves sell transformer oil stolen from electric transformers to operators of roadside food stalls for use in deep frying, suitable for prolonged use longer than regular cooking oil, but a threat to consumer health due to the presence of PCBs.

All content from Kiddle encyclopedia articles (including the article images and facts) can be freely used under Attribution-ShareAlike license, unless stated otherwise. Cite this article:
Cooking oil Facts for Kids. Kiddle Encyclopedia.